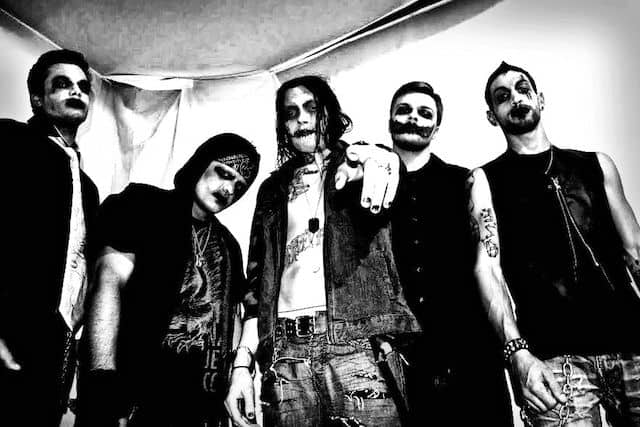 Common Wealth is an underground rock band from New Jersey who combines theatrical elements with a catchy hard rock/metal sound to make one of the most unique and original bands in the underground metal scene today. The bands theatrical take on stage imagery and their ability to have heavy metal tunes crossover to fans of other genres makes them stand out amongst the rest and makes them an Artist You Should Know.

Common Wealth is a 5-piece band consisting of Christian Carson (vocals), Charlie Wealth (bass/backing vocals), Vinnie Black (guitar/backing vocals), Giovanni St. James (guitar/backing vocals) and Joe Capasso (drums). The band hails from a small town in New Jersey and although they have only been roaming the underground scene for 2 years, the band already has an extensive resume. Common Wealth has shared the stage with popular metal acts Nonpoint, Drowning Pool, and Adrenaline Mob, has recieved airplay on Ozzy’s The Boneyard channel on Sirius XM Radio, featured on magazine articles/ interviews as well as headlining shows/events for Vh1 Classic “That Metal Show” host, Don Jamieson.

With influences like Metallica, Slipknot, Alice In Chains and Incubus, the band combines all these genre’s into one to make a sound completely their own. They are also known for their high energy shows with the captivating vocals and stage presence of lead singer Christian Carson. Besides the shows they put on in their home town of Jersey as well as the occasional stints in NYC, the band has also planned on making stops in California, Texas and Tennessee in the summer of 2015.  They are not to be missed when in town!

Common Wealth has released an EP titled “No Rest For The Weary” which has received significant airplay on major N.J f.m Rock radio st. 95.9 the “Wrat.” The band is currently in the process of recording their first full-length album, which is expected to be as catchy and hypnotizing as their first EP release. For a taste of their newest single “Cut This Deep”, listen to the single’s teaser below, and stay tuned for the entire song plus a music video to be released on APRIL 20th! Also for future shows, check out the bands Spring Tour video teaser. Spread the Wealth and support the band!