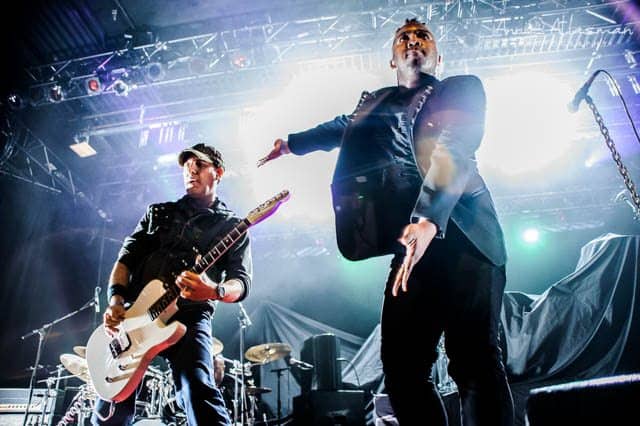 Honor Among Thieves hails from New York City and is known for being a groovy hard rock band with an all around good vibe. From the very first time you see them perform, you realize their on stage performance is really a reflection of who they are off stage. Their good energy easily translates to their audience and their mix of 80’s hard rock with modern rock is the perfect combination to create a sound all their own. Honor Among Thieves’ good vibes are rarely seen in rock music today, and their fresh sound gives us something new to catch on to. Their live performance opening up for Sixx A.M. left an impression on us, and for this reason they have been named an Artist You Should Know.

Honor Among Thieves, was formed in 2003, in New York City’s Lower East Side by members Dave (Dave of Thrones) Brooks on drums, Sebastian Correa on the bass, Eric (Eric Zee) Zaretsky on guitar and Cherokee Fortune on vocals. The band set off with a single purpose in mind: To give people some great Rock n’ Roll and a good time! Shortly after forming, they released their first CD titled Edge Of A Razor, which was well received by the often picky New York City Rock fans and media. Described by New York’s famous Village Voice newspaper, as a band sounding “somewhere between Black Sabbath and Black Flag.”

The early days of the band’s history saw Honor Among Thieves sharing the stage with NYC rock regulars such as Banana Fish Zero, The Sex Slaves Super Villain and Joker Five Speed to name a few. They also performed at such notable New York City venues such as Don Hill’s, CBGB, Continental and The Trash Bar as well as road dates with bands such as LA Guns, The Misfits, Lauren Harris (daughter of Iron Maiden bassist Steve Harris) and The Sex Slaves. When singer Cherokee Fortune left the band to pursue family life, the remaining members quickly found a replacement in local singer Tara Lorin and continued bringing their music to the people. However, the union was short lived and the band members lament that no recording was produced.

Certainly not down or out, Dave, Eric and Sebastian found a kindred spirit and new singer in their long time friend Maurice Johnson. Maurice brought a new and different sound to the vocals, which the remaining members quickly adjusted to and in less than a year after Maurice joined, Honor Among Thieves released their second, and self titled CD. This CD has again been well received in the New York Scene and celebrated by music media around the USA. Both CD’s are available on iTunes, CD copy and free streaming sites such as Spotify.

A quick look at the influences from all four members shows their musical taste to be as widely varied as their individual personalities. They list artists such as Prince, Living Color, Black Sabbath, Rush, Iron Maiden, Motorhead, Jane’s Addiction, Aerosmith, Alice In Chains, Supersuckers, Clutch and Elvis Presley all as influences. All four members agree that they are, in one way or another, often influenced by just about every piece of music they hear. Maurice has been the front man for several years now, and in the band’s 12th year together overall. 2015 is shaping up to be their strongest year to date; an accomplishment the band members often attribute to their consistent shared love of playing music together. Honor Among Thieves can still be seen on New York City stages and often alongside NYC bands such as Killcode, The Dirty Pearls, Ten Ton Mojo, The Bullys and Atom Strange.

Riding the strength of their self-titled CD, which one journalist described as “A hard rock kick in the teeth that should come with a shot and a beer…” as well as coming off of a huge show at New York City’s famed Best Buy Theater with media proclaimed super group Sixx A.M., Honor Among Thieves shows no signs of slowing down.