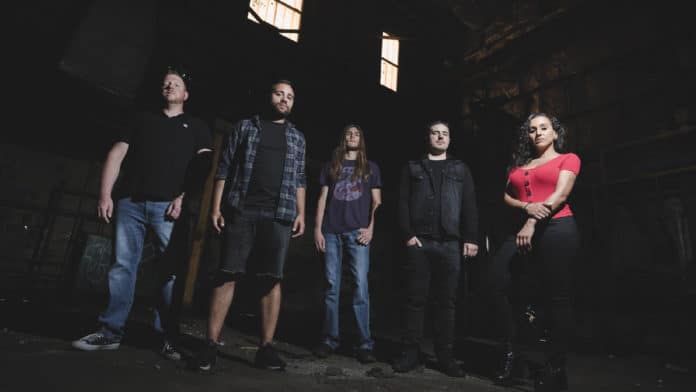 Amongst the talented group of up and coming bands from the New York music scene, Monochromatic Black stands out as one of the most impressive. The band who is based in Long Island, NY, self categorizes their music as metal, hardcore and progressive, though they bring a new aesthetic to the heavy metal genre.

My first introduction to Monochromatic Black was running into their video “Phosphates” on YouTube and my initial reaction was being blown away by how heavy and complex the sound of the band was within the first couple of seconds. Lead singer Tanya Beickert’s growls are aggressive, however, as the video progresses the music moves into beautiful atmospheric textures with soft vocals from Beickert, displaying her broad vocal range.

Even with the hit the underground rock/metal scene of NY has taken in recent years, there remains a new wave of emerging artists that keep pushing to keep it alive. One particular space that seems to be doing this is Long Island, with bands like Monochromatic Black forming a part of this new wave of musicians to come out of the small, overlooked island. Their EP titled Pneuma was released in 2019, and displays varying styles from each musician which collectively produces a refreshing, innovative sound.

Here is a documentary short on the making of Pneuma. To purchase Pneuma, click here.

The talent of each band member is undeniable and Beickert’s ferocious vocals give the already brutal musical arrangement an extra edge. The collective mix of influences, sounds and genre’s make Monochromatic Black a particularly exciting new act and one I hope to follow throughout their growth and future releases.

I was recently able to interview lead singer Tanya myself on topics such as the band’s history, their new EP and future plans.

TSL: Can you tell us everyone’s name and what their role in the band is?
Tanya: Tanya – Vocals, John – Guitar, Eddie – Drums, Arthur – Bass & Dan – Guitar

TSL: Your voice is truly remarkable. Who are your biggest influences as a singer?
Tanya: Thank you so much! For clean vocals I am a huge fan of Maynard from A Perfect Circle, Jimmy Gnecco of Ours, Jeff Buckley & Michael Lessard from The Contortionist. My harsh vocals I am influenced by Travis Ryan of Cattle Decapitation & Anthony of After the Burial.

TSL: What is your vocal training? How do you prep for shows?
Tanya: I’ve only had a few vocal lessons years ago, aside from that I just practice as much as possible. Prepping for shows, I just warm up beforehand or screaming the alphabet in low, mid & high screams.

TSL: How has Long Island inspired the band’s music?
Tanya: I’d say for us all being in the scene for so long out here we have all grown as musicians and all the different past projects we have been in and experiences have helped us in the long run!

TSL: The band released their EP titled Pneuma last year, congratulations! Where did you guys record and who helped? Thank you thank you!
Tanya: We recorded the album at Westfall Recording Studios in Farmingdale with Anthony Lopardo. Ray Marte of Moon Tooth mixed and mastered it for us.

TSL: What is the meaning of the title?
Tanya: It means the vital spirit, soul or creative force of a person.

TSL: What were some of the major influences on the band for this EP?
Tanya: We all have so many different influences so it’s hard to pin point but the different ones we have we feel helped make this album unique!

TSL: Is there a concept for the album?
Tanya: Yes, this is the first half or chapter and our second EP will be the other.

TSL: Do you have a favorite song? If so, why is it your favorite?
Tanya: I like “Dream Catcher” a lot. It goes from serene to eerie to brutal all in one track!

TSL: Do you have anything else planned after the mini tour coming up?
Tanya: Post our January tour just more writing, recording and shows!

Monochromatic Black just returned from a string of US tour dates which included NAMM in Los Angeles. Stay tuned for more show announcements and their upcoming second EP by following them on their socials: