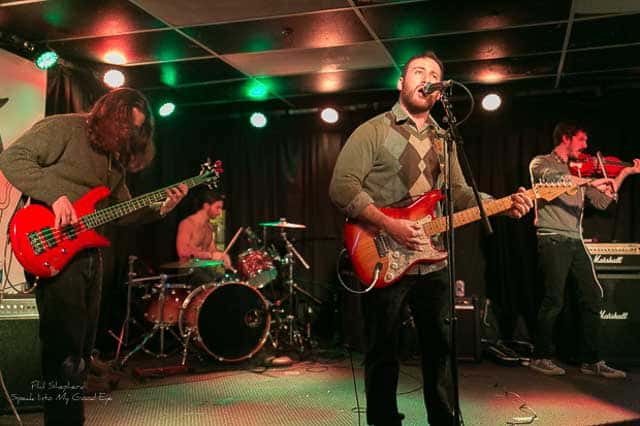 Based out of Freehold, New Jersey, We’re Ghost Now layer catchy choruses with rock melodies and a violinist to produce versatile pop-rock tunes. Their music will make you fall in love with the sound of a violin and how perfectly it compliments contemporary music. “Haunt Me” perfectly displays the bands ability to combine different genre’s without losing the melodic component and still creating an appealing product.

We’re Ghosts Now was created out of the ashes of a former project created by Ben and Max Resnick in early 2012. Ben Resnick states, “Max and I had been playing guitar, vocals, and bass in a band that had come to an end due to members pursuing other interests. Our other brother, Jake Resnick, had just started playing the drums at this point, so we decided to give it a go and see what happens.” What began as three brothers jamming at their parent’s apartment in Freehold, NJ would soon turn into something much bigger.

Through a few lineup changes that included a keyboardist/vocalist, the band found their missing piece and what would make the band stand out among the rest. As told by Max, “We were at a music festival put on by one of our close friends, when we stumbled across long time friend Alexander Iannone, playing violin amongst a group of people, jamming away. We never even knew he played, but we did know that we wanted his orchestral yet whimsical strings to accompany our unique western rock sound.” After a tryout, the band had become complete with Iannone by their side.

The band is actively out playing shows and as no plans of slowing down. “We just love playing music. It’s what we do and it’ll always be what we do”, says Alex. “The dream is to make it into something we do as a career and not just between jobs we don’t care about.”

You can keep updated on all things We’re Ghosts Now via their Facebook page and on Twitter. Check out their video for “Haunt Me” below!