The Sound Live
Home Interviews Getting to Know: The Flavr Blue 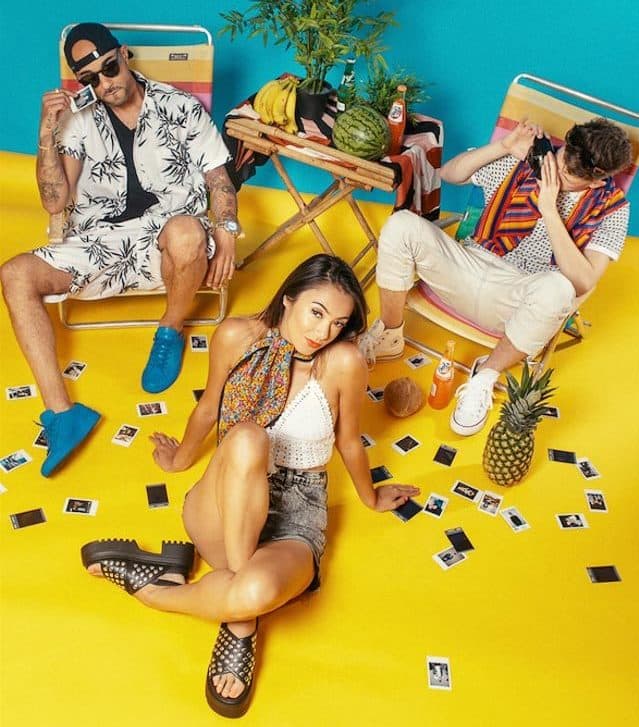 One of the most promising artists to rise out of the northwest is The Flavr Blue. The Seattle/LA-based band combines catchy pop rhythms with hip-hop, bass heavy tunes that’ll stay stuck in your head for days to come. The Flavr Blue is fronted by singer-songwriter, Hollis Wong-Wear, whom you may know from her feature on Macklemore and Ryan Lewis’ “White Walls'”. I got to chat with the band who shared everything from their geographical influence, the production of their latest album, Blue Dream, and future touring!

TSL: Who is The Flavr Blue and how did you guys come together?

The Flavr Blue: The Flavr Blue is Hollis, Parker and Lace — three friends in Seattle who teamed up to make music after meeting in the hip-hop scene of Seattle. We wanted to make music that was distinctly different, a new direction from the music we were making at the time. We were inspired by Scandinavian pop music and wanted to bring our hip-hop sensibilities in a more dance direction… and that’s how our band was born!

The Flavr Blue: We’re definitely influenced by both Seattle’s homegrown music as well as the vast global influence of California’s defining West Coast sound. From the grunge era in Seattle to West Coast rap, we see ourselves as part of the continuum, infusing electronic elements into a rich tradition.

TSL: Your sophomore album, Blue Dream, was released on October 27th. What is the meaning behind the title?

The Flavr Blue: First, Blue Dream is one of our favorite strains of cannabis — a perfectly legal recreation in Seattle! — for its creative high. But further, Blue Dream encapsulates the idea of departing from the day-to-day and taking off on a journey. We wanted this album to be the perfect soundtrack for a road trip down the coast, a rooftop party with the homies, or setting the mood for the turn-up. We wanted to infuse a dream-like state into some times that really feel like they need it right about now.

TSL: Can you discuss the production of the album?

The Flavr Blue: Parker and Lace were the executive producers of the album and composed the majority of the music — using both electronic as well as live instrumentation. Songs like “Picture Perfect” and “Simple Love” showcase their guitar compositions, and songs like “Live It Up,” “Top Down” and “Fetti & Spaghetti” show their bass-heavy, trappier hip-hop production background. We also teamed up with a few other producers, such as Teal Douville — the album’s recording and mixing engineer — as well as Sweater Beats, Cha Cha Malone, and manicanparty.

TSL: The Flavr Blue is fronted by Hollis Wong-Wear, who is featured on Macklemore and Ryan Lewis’ “White Walls” track off of their album The Heist (2014). Hollis was nominated for a Grammy Award for songwriting and vocals on the track, how was that experience?

The Flavr Blue: It was a great experience and one of my first co-writing endeavors. I appreciate Macklemore and Ryan Lewis for being such great collaborators and believing in me as a songwriter and vocalist when I was just starting to break out of my shell.

TSL: I know Hollis is also a spoken word poet. How does this influence the lyrical production and expression of the band?

The Flavr Blue: Lyrics are always what stick out to me when I’m listening to new music — I see songwriting as writing poetry set to a melody. The cadence and rhythm of the words I sing — and the story I tell within them — is the most important aspect to me as a songwriter.

TSL: Are you guys currently touring?

The Flavr Blue: 2018 is going to be tour heavy for us! We’re planning on not only hitting the West and East Coasts — hopefully the midwest and south as well — but also hopefully getting out to Japan, Korea, and more Asian countries to connect with artists and fans out there.

TSL: Where can readers keep up with The Flavr Blue?

We want to thank The Flavr Blue for letting us get to know them better! Please take a moment to follow the band through social media and check out their latest video release for their remixed track “Top Down” ft. The Last Artful and Dodgr!