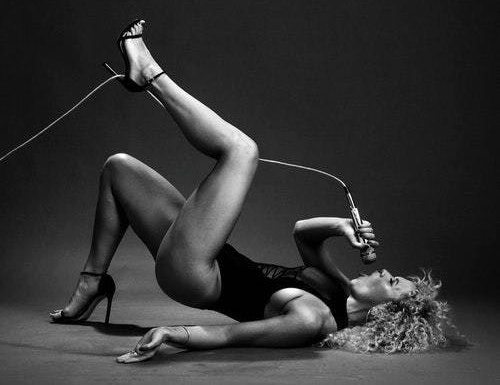 Liza Colby has been fronting her NYC based band The Liza Colby Sound for eight years now and continues to roam the NYC music scene giving some of the most energetic rock n’ roll shows the city has to offer. We got to chat with Liza about her band, her influences and the bands latest release, DRAW– out November 22nd!

TSL: Can you tell us a little bit about yourself and your project, The Liza Colby Sound?
Liza Colby: My name is Liza Colby and I am the front woman of our band The Liza Colby Sound. We have been consistently serving up badass rock and roll out of NYC and our new EP DRAW, which is out now!

TSL: Who are the other musicians in the band?
LC: The rest of Liza Colby Sound is Alec Morton on bass, Charly Roth on drums and Tom McCaffrey on guitar.

TSL: You’re releasing the EP titled DRAW; what is the meaning behind the title?
LC: This was a really emotional record. We had been sitting on it for a while because these were the last songs we recorded with Adam Roth, our guitar player who passed nearly 2 years ago from cancer. We titled the EP DRAW because it was time to pull the trigger and find out who we were post the loss of Adam/share the music that we made with him. DRAW became the conduit to our past and a bridge to the future.  Sonically you’ll hear this because our new guitar player Tom McCaffrey is on this record along with Adam. We remixed, and re-mastered DRAW as well and feel that it really represents where were going as a band.

TSL: What is the main message you’re getting across?
LC: There are no seasons and rock ‘n’ roll.

TSL: You have been based in NYC throughout your entire career. What does NYC add to your music, your style, yourlife?
LC: There’s an enormous sense of pride that comes with being a New York City band. There’s an aesthetic presence think: Lou Reed to the Ramones, Blondie, Talking Heads, Richard Hell, Karen O, The Strokes the list goes on and on. NYC kicks you in the face; tough, gritty, sexy, tight Rock ‘n’ roll, with an essence of cool. That’s the New York City thing, there’s always that essence of cool.

TSL: Speaking of NYC, you just completed a residency at NYC’s Bowery Electric, how was that?
LC: It was great. Bowery Electric has always been a home venue for us. So it really felt right having a residency there to support this upcoming EP.

TSL: You shared the stage with other artists making big moves in the underground, like Barb Wire Dolls. How was it having them as support?
LC: I love playing on bills with women and playing residencies/touring is a great opportunity to get tight as fuck. And we love to play.

TSL: What are some future plans for you? For The Liza Colby Sound?
LC: We are working on a new record! And we’re planning to get out to Europe in 2018. Keep your ears and eyes open!

TSL: Are there any tour dates we should keep an eye out for?
LC: Out next tour dates are in January:
3rd-The Mckittrick Hotel, NYC
11th-Ilegal Mezcal Music Series at the Mailroom, NYC
13th-12 Grapes ,Peekskill NY
18th-The Barbary, Philadelphia PA
19th-Bowery Electric, NYC

We want to thank Liza Colby for taking the time to chat with us and make sure you check out DRAW here.