Getting to Know: Break of Reality 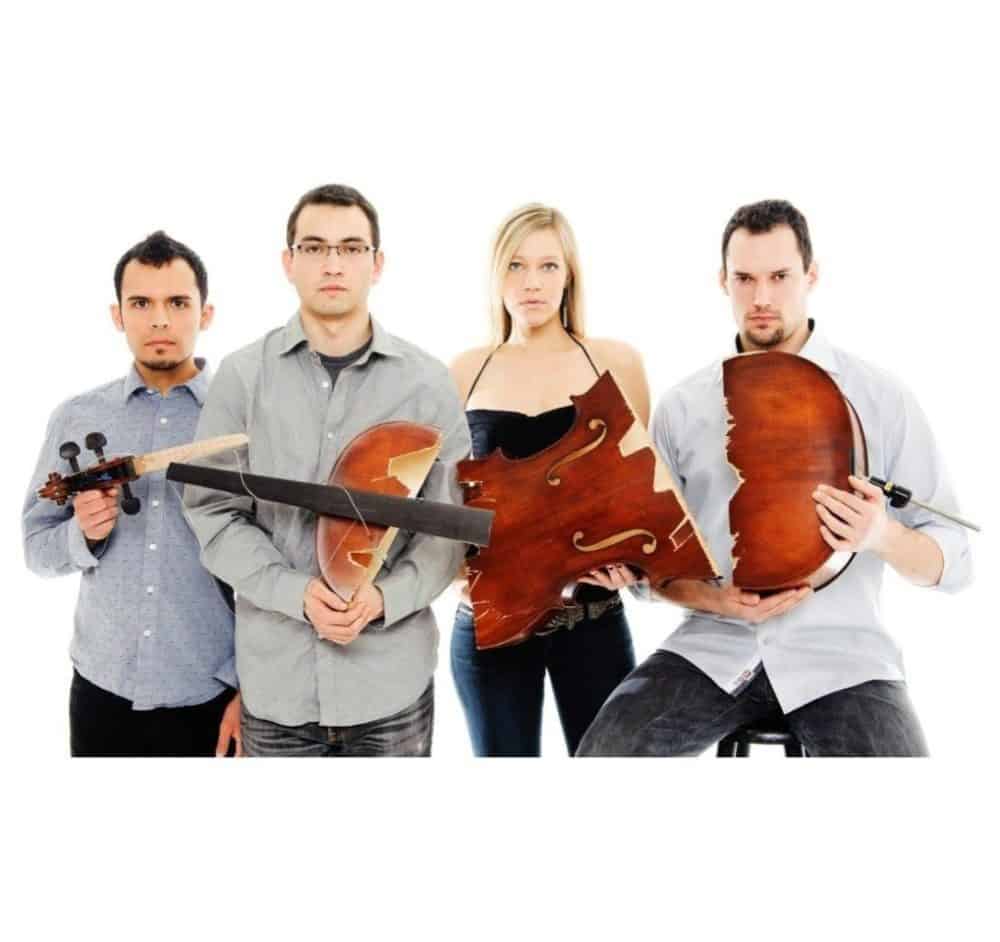 Innovative cello band Break of Reality (Patrick Laird, Laura Metcalf, Ivan Trevino, Ben Capps) took some time off to chat with us, sharing their experiences as musicians, their inspiration and their own personal advice to other aspiring musicians.

TSL: Lets talk a bit about your own personal experience with the cello and with percussion. When did you start to play and when did you know you wanted to pursue it as a career?

Laura Metcalf (cello): I started playing the cello when I was 9. I copied my little sister, I got jealous that she played the cello. I would say that when I really knew that I wanted to pursue it as a career was not until my first year of college. I actually went to a music festival in Aspen, Colorado (Aspen Music Festival). There were all of these amazing musicians from all over the world there and it was kind of there that I realized A) how many great musicians there were and B) how much I had to work to catch up to them to really have a shot at making it into my career. I think that’s what really motivated me to really start working hard.

Ben Capps (Cello): I started playing when I was four. I had some freakish talent from when I was really young, so from the very beginning I developed really young. Ended up going to Juliard with pre-college at 9. By the time I was 16 I had played concertos with orchestras and as a soloist. That was the time where I really had to step back and realize what I was going to do with my life. It’s at that time when I had to figure out that I was going to be a performer, which is different from deciding to play the cello. If you play the cello, you can study it, you can play, you can teach, but being a performer is totally different. So I really decided to pursue being a performer, which I believe is an important step.

Patrick Laird (Cello): I started when I was 9 years old, when I was blossoming as a cellist. I think that initially I was really in love with the instrument; I love the way it sounds and the way that it fit me. Through high school I was playing cello as well, but when I moved in the 7th grade, I didn’t have an orchestra in my new school system. All my friends there were metal heads, they were guitarists and drummers, and so from an early age I was exposed to all of this heavy music. We would come into the city and go see Slayer play and all of these heavy bands. I’ve loved playing the cello, I’ve always been really into classical music as well, but it wasn’t until I started writing music and experimenting with the sound that I kind of found what I loved to do with the instrument. It was there in high school that I began preparing to be a classical musician. So I went to a conservatory college and formed this group when I got there.

Ivan Trevino (Drums): I started playing since I was a baby. My dad had a band and they threw me on the drums, so I’ve been playing since then. It’s in my blood and I love doing it, I don’t know what else I would do if I didn’t do music. I feel like some of the most happy moments of my life have happened because of music.

TSL: What were some musicians who inspired you?

Ivan: No! I really like Anne Clarke from the band St. Vincent. I just saw her do an interview the other day and it was really interesting what she said. She said, “I don’t  make music that’s ever going to have mass appeal, but I’m okay with that. I wouldn’t be a happy artist if I wasn’t making music that I envisioned and thought it should be made.”

Patrick: That’s kind of aligned with what we do.

TSL: Your latest album is titled “Ten.” Can you talk a little bit about the inspiration for the album?

Patrick: Well it’s titled 10 after our 10 year anniversary as a group, so we’ve been together for 10 years and it’s been an awesome road. So this album kind of commemorates all that we’ve been through up to this point and kind of represents everything we’ve done as a group, so that’s how it got it’s name. It also has 10 tracks.

TSL: Would you guys ever consider having a permanent singer on tour, like other classical musicians? (example: Apocalyptica and Lindsey Sterling)

Ivan: I don’t know, I mean maybe? I think collaborating with vocalists is something we’d want to do more of but, I don’t know if we want to make our band like a band that has a frontman singer. But I think we enjoy collaborating, but uhm, who knows? It could be a possibility.

Patrick: I would imagine we’d have guest artists at performances. For the last 10 years the band it’s been the four of us, 3 cellist and a percussion. It’s who we are and it’s been a strong thing for us, so I think any vocalist in the future it would be collaborations more.

Ivan: Right it wouldn’t be like a new member of the band.

TSL: What have been some of the struggles you guys have endured as musicians?

Patrick: I think being a classical musician, and specifically a string musician requires an incredible amount of dedication to their instrument and a lot of sacrifice comes with that. Like in high school instead of hanging out with friends 24/7 after school, we were all spending a lot of time on our instruments. It’s what we love to do so in some ways it’s a sacrifice but in other ways it’s a part of who we are.

Ivan: Even besides from cello, when you get to really top-level musicianship, any instrument, all of those people probably went through similar things; sacrifice a lot of time, practice a ton. A lot of us are married or are going to be married and we travel a lot, so being away from home is a big sacrifice too.

Ben: Difficulties and hardships, one for me is this idea of becoming a performer. It’s easy to decide you want to play the cello, but that’s kind of the first step, then there’s all of these difficulties after it. Whether you want to become an artist? Figuring out what genre, whether it is classical or rock, figuring out the soul of it, you know? That’s being an artist. Beyond that, it’s being a performer. Just learning the cello is the skill set, the next is the artistry, the mental, the soul and the world connecting through music. Then performance, showing all the skills that you have. They are all steps, badges of honor.

TSL: As a fellow musician, what is a piece of advice that you would give underground bands who are trying to make it in the music world?

Patrick: First thing is that you have to focus on who you are and your sound. I think some people try to over market themselves like finding a record label to make it big. I think all of that focus takes away from creating your brand and creating who you really are. Also creating really good music, that takes time. The principal no matter the genre stays true. We have been a band for 10 years and it hasn’t been like, 2 years in and we’re famous. It’s been 10 years of true dedication and slow growth. Even now we take a breather and ask, what can we do better, how can we make our music better? That’s important, you constantly have to be growing without thinking about finding a music producer.

Ivan: You can follow bands too and see how they did it. But ultimately, every band has to find their own road. There is no strategic plan.

Patrick: Even if there was, it would become so over saturated that eventually it wouldn’t work. Every band out there that has made it for themselves, has a unique flare that can’t be reproduced. You need to focus on your brand and see what you bring to the music world.

TSL: One last question, what do you hope people take away from your music?

Ben: I hope they come away feeling the same way that I feel when I play the music. It’s an incredible music and rhythm that gets inside you. There’s nothing like it.

We’d like to thank Break of Reality for taking their time to speak to us. Make sure to stay posted with them on their official website and their Facebook page.