Getting to Know: Entheos 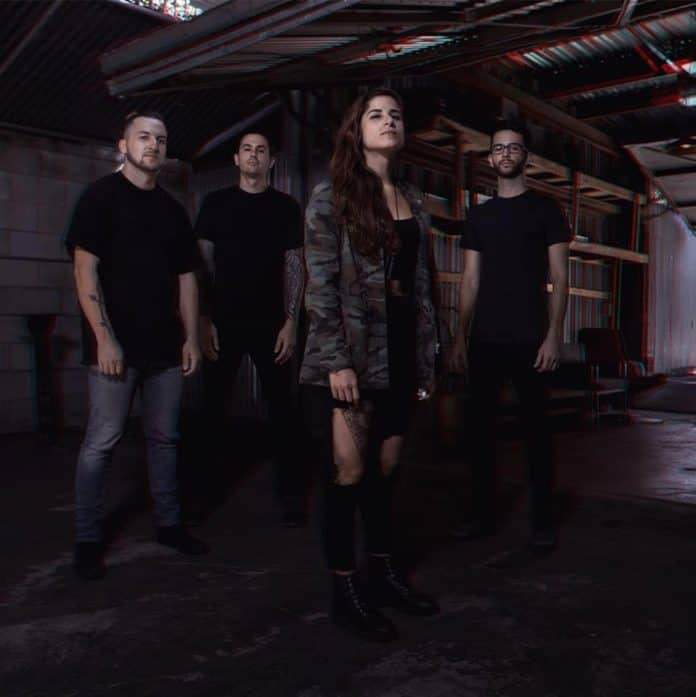 The extreme metal super group, Entheos released their latest album titled Dark Future in late 2017 and were part of the 2018 Summer Slaughter roster. Entheos lead singer, Chaney Crabb, gained notoriety through her YouTube audition for the vacant spot as Veil of Maya’s co-lead singe and we had the opportunity to chat with Chaney on topics such as Dark Future, the band’s beginnings, their influences, and touring as part of Summer Slaughter.

TSL: Who are the members of the band and what instruments do you all play?

TSL: I know you are all previous members of other bands; how did you guys meet and decide to become Entheos?

CC: Navene, Evan and I met years before Entheos was an idea. Navene and Evan met in the early 2000’s through their former bands Animosity (Navene) and Reflux (Evan). Evan eventually joined Animosity, through which they both met Travis while he was playing in a band called Scale the Summit. In 2010 I met Navene while he was playing for Animals as Leaders, we started dating and I ended up selling merch for the first AAL headliner in 2011. This was also Evan’s first tour as a solo artist. Evan rode with Animals for the entire tour, so he and I hung out a lot that way. Fast forward to December of 2014 – Navene was now on tour with his solo project, Navene K, and decided that he wanted to start a new metal band. He asked Evan and me to join, as well as our friend Frank Costa, who was the guitar player of Animosity. I met Travis through touring with Entheos, and after Frank left we collectively decided to ask him to join the band.

TSL: The band’s latest album Dark Future was released in 2017 via Spinefarm Records; what was it like to get back to writing so quickly after the bands debut in 2016?

CC: Really, it’s just normal to us to write that consistently. I would say that our band never stops writing – from riffs to lyrics, it’s just kind of what we do. 2018 is actually the first year in the history of our band (since early 2015) that we haven’t released anything, but we’ve definitely written quite a bit of material.

TSL: Dark Future seems to be a concept album, am I right? What is the theme and/or message behind the album?

CC: Dark Future is a concept album in the way that there is a centralized motif — that being that in the end, regardless of experience, we all face the same ‘darkness’— death. The songs touch on different things.. from depression, anxiety and fear to learning to accept and overcome the things which we cannot change and doing what we can to make the world a better place in the time that we’re given. Right before we started the album a friend of mine who had suffered from PTSD because of his time in the military had ended his life, and this is a part of what set the tone in my mind to write the record.

TSL: What’s going on in the album’s cover?

CC: The cover of Dark Future to me is a representation of finding light within the darkness.

TSL: Chaney, your vocals are incredible. What are some of your vocal influences?

CC: My influences are really all over the place, and I feel as if I’m constantly finding new people to be inspired by. Some of my biggest vocal influences are Karen Dreijer (The Knife, Fever Ray), Jeremy Bolm (Touche Amore), Jacob Bannon (Converge), Anthony Green (Circa Survive), Karen O (Yeah Yeah Yeahs), Stevie Nicks (Fleetwood Mac), Randy Blythe (Lamb of God),  John Gallagher (Dying Fetus), Jonny Davy (Job For a Cowboy, Fleshwrought), Maynard James Keenan (Tool, A Perfect Circle),  Shagrath (Dimmu Borgir),  Paul Masvidal (Cynic), the vocalist of Fredrik Thordendal’s Special Defects / Sol Niger Within album — rumored to be Fredrik himself, Kilo Kish + more. I could probably go on for a while. I really draw inspiration from many different areas.

TSL: What are some of the bands Entheos currently listens to?

CC: We listen to all kinds of things— when we’re all together listening to music we listen to a lot of classics like Steely Dan, Zappa, Jean Luc Ponty, etc. Air is a band that we all mutually like.. all of the bands I named vocalists from,  etc. We listen to such a variety of music that it’s hard to pinpoint one artist. From country music to electronic stuff to death metal to r&b/rap, etc. We listen to a ton of music. Nothing is off limits.

TSL: Entheos has been on the road as part of Summer Slaughter, what has that been like? What is your favorite memory from tour so far?

CC: Summer Slaughter was a blast. It’s a tour that we’ve collectively wanted to do since the inception of the band, and we were happy to have a chance to play alongside a lot of our dear friends, old and new. We always love playing shows, of course, but a lot of my favorite memories revolve around hanging out with our tour mates in all of the other bands. I would liken it to a metal summer camp. We had a lot of great ‘tiki tuesday’ parties and hangs.

The experience of playing Heavy Montreal was also definitely a highlight of the summer. The festival was huge, the staff was incredibly friendly and it was like a dream to play. I can’t wait to go back.

TSL: What plans does the band have post Summer Slaughter? Will there be more touring?

CC: There is a lot of touring ahead for us. We’ll be heading to Europe/UK for the first time in November alongside Beyond Creation, Gorod and Brought By Pain. We’ll also be doing a short west coast run before the end of the year with some really cool bands. Next year we’ll do some more touring and will be working on our next album.

TSL: Where can readers keep up with Entheos?

We would like to thank Chaney Crabb for her time in discussing Entheos with us! If you haven’t already, check out the band’s single “Pulse of A New Era” off of Dark Future. Click here to purchase the album!