The Sound Live
Home Interviews Getting to Know: Tigers & Monkeys 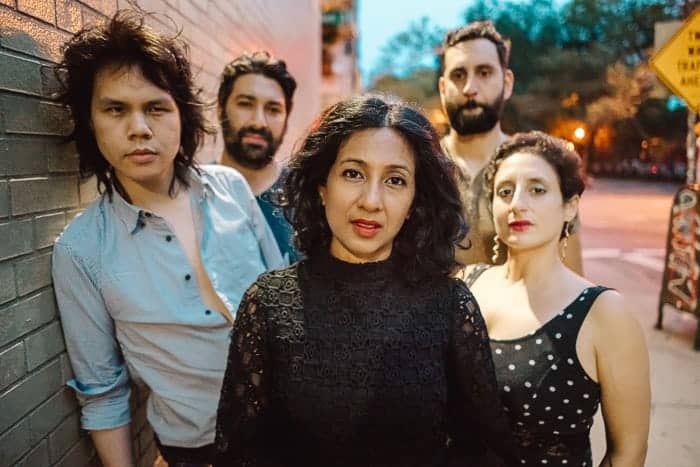 Indie rock band Tigers and Monkeys have recently released their first studio album titled Saturday Destroyer and we caught up with the band to find out all the details on the band, their new album and their friendship with some of the most popular comedians on television.

TSL: Who are the members of Tigers and Monkeys and what instrument do you all play?

TSL: How did you guys come up with the band’s name?

I had come to New York from Atlanta with some songs already written and was ready to perform.  I had some gigs lined up but didn’t want to use my own name so I asked a comedian friend of mine at the time, Demetri Martin what I should name the project.  He asked me what are my two favorite animals and my answer resulted in the name of my rock band: Tigers & Monkeys.

TSL: Where is Tigers and Monkeys based?

T&M: We are based in New York City.

TSL: Shonali, I know you used to be a layer before you turned to music. That’s a big change! What influenced you in trying out music?

T&M: I have been playing music since I was a kid.  I was writing songs before I started law school but didn’t start performing live until I was in law school. Crazy, right?  As I noted earlier, music has always played an important role in my life.  Initially, I attended law school with hopes of helping the poor and marginalized with the notion of increasing access to justice for all people.  The problem with that was that pro bono work monetarily speaking had a similar financial return to that of being an indie rocker and since music is my biggest passion, I decided it was most important for me to continue down that path.  I imagine I will be making albums til I am 85 years old regardless if anyone wants to listen to them.

TSL: The band’s latest album Saturday Destroyer will be released on September 17th.  The album has a variety of genres mixed in such as indie rock and pop, what was the bands influence when creating the album?

T&M: Our influences are wide ranging. I am from Nashville, TN and grew up loving Johnny Cash while my parents being first generation immigrants from India played Kishore Kumar songs on the turntable, so I am certain both these singers inspired my music in some way.  As for immediate noticeable influences, current indie rock acts such as Courtney Barnett, Savages, Arcade Fire, Broncho come to mind but there are deep influences from the past such as the Replacements, Blondie, PJ Harvey, Pixies and The White Stripes.

T&M: Little Lamb Recordings is headed by myself and my partner Jason Lam who also is in Tigers and Monkeys. On a personal note, this is the 8th album I have released. I was formerly in a band called Ultrababyfat which was on a number of labels both indie and major.  The music industry has changed tremendously since those days with social media and the internet giving musicians direct access to their fans.  I knew it was time for me to take full control of my music and it has been a rewarding endeavor.  Today Little Lamb Recordings is proud to release both music and comedy by up and coming artists we believe in.  We give our artists creative control over their work.  Our priority is to provide fantastic artists with the exposure and recognition they deserve.

TSL: I understand that Shonali, you’ve been friends with Fred Armisen for a few years now and that he took part in directing some of the bands music videos. Can you tell me about how you guys became friends and how he took part in Tigers and Monkeys?

T&M: I’m a member of a comedy group called Variety Shac along with members Heather Lawless, Andrea Rosen and Chelsea Peretti.  We had a monthly live show at UCB, our short films were well received in the comedy world and we generated a loyal following.  Fred performed at our live shows a number of times and we organically became friends during that time.  We have a unique connection in that he started out as a musician before he became a comic.  He’s always been generous and supportive towards my efforts as a musician and comic.  He directed our “Loose Mouth” video and starred in the “Fire Escape” video.

TSL: Tigers and Monkeys played Little Field a few days ago, where the band played Saturday Destroyer in it’s entirety and SNL writer Nimesh Patel and the comedic dance group Adira Amram & The Experience opened the show. How do you all know each other and how was the show for you guys?

T&M: The pre-album release show was a blast! There was that extra special feeling that night because the show was a celebration with friends, family & fans of the band.  New York City has so many phenomenal performers and I’m fortunate to have great friends who come from both the music and comedy scenes here. Nimesh and Adira are brilliantly talented artists and both have been longtime friends of mine.  Their performances were the perfect addition to the night’s festivities.  Nimesh, also has been a guest co-host with me on my monthly live variety podcast, We Don’t Even Know a number of times.

TSL: Is the band currently touring? What does the band have planned for the future?

T&M: Our upcoming album, Saturday Destroyer will be formally released on September 17th. Our plan is to perform East Coast dates at the end of October and we will be performing more dates in NYC during September. One of our guitar players is going to be living in Kolkata in the upcoming new year, so plans are to perform in India. We also have a bunch of rad videos we will be sharing with the public in the upcoming months. Our eventual plan is to take over the world.

TSL: Where can readers purchase the album and follow the band?

T&M: Our website is www.tigersandmonkeys.com. Our new album will be released on 9/17/18. You can preorder our album (digital, CD, Vinyl) on Bandcamp: https://tigersandmonkeys.bandcamp.com/

Here’s a link to purchase our single, In An Instant which was released this past week. https://listen.lt/TigersandMonkeysInAnInstant

Thank you to Tigers and Monkeys for chatting with us! Check out their music videos for their single “Dinosaurs Surrender” below.