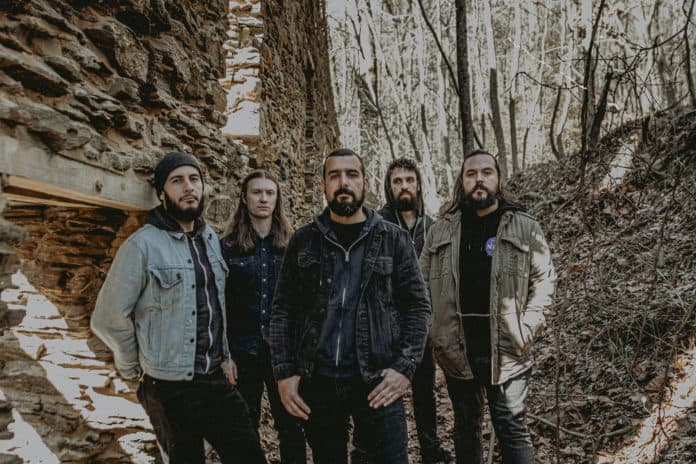 The Atlanta based heavy metal band Irist released their debut album titled Order Of The Mind on March 27th via Nuclear Blast. Made up of Rodrigo Carvalho on vocals, Adam Mitchell on guitar and vocals, Pablo Davila on guitar, Bruno Segovia on bass, and Jason Belisha on drums, the band has a strong, developed sound and is part of the new wave of heavy metal bands that will define the next era of the genre. We were lucky enough to interview members of the band on their first album, their Latino roots and their influences.

Mayra: Congratulations on your debut album Order of The Mind!

Mayra: Where did you guys record and who was involved in the making of the album?

Pablo: We recorded with Lewis Johns at The Ranch Production House in the UK.

Mayra: What is the meaning of the album title, Order of The Mind?

Rodrigo: It means commands, as if given by generals to their soldiers, of our minds to ourselves. It refers to psychological limitations we all have to overcome at some point in our lives.

Pablo: It’s not easy to answer that question in a way that represents the entire band. For me personally, there are a handful of childhood influences, like early Nirvana, Sepultura, and Fear Factory, that I rarely listen to anymore, but would binge on during my teenage years in the 1990s. I think those bands will always inevitably be embedded in some aspect of my writing. As I got older I broadened my scope of influences pretty drastically; especially where rock and heavy music are concerned. I got into more “post sounding” bands like At the Drive-In, Refused, Neurosis, Amenra, and Russian Circles. To my ear there are little bits and pieces of all these bands scattered throughout this album.

Mayra: Rodrigo, who are some of your biggest influences as a vocalist?

Rodrigo: There are many, but these come to mind at the moment: Rob Chaos, Ray Cappo, Max Cavalera.

Mayra: For those of you from Latin America (Rodrigo, Pablo and Bruno), what was each of your individual experience getting into music while living there? How has each of your country’s influenced your musical character and sound?

Pablo: I got into Latin American music through my parents. I moved to the U.S. at an early age, but there was always Latin music playing in the house. Everything from Argentine folk music to salsa. I briefly moved back to Argentina in my late teens and got really into a few Argentine punk and metal bands. Bruno had a very similar musical upbringing as I did. I’m pretty sure he stills listens to Victor Jara and Silvio Rodriguez every day. Rodrigo was the last one to emigrate to the U.S. in his 20’s. Aside from the more traditional Latin stuff, I know that there were several Brazilian hardcore bands that had a massive influence on him.

Collectively, I think our influences bring a unique energy to the band. I’ve said before, that having a “latin influenced” band doesn’t necessarily equate to showcasing latin percussion or singing in Spanish or Portuguese. For us it’s just something that heavily informs rhythm and flow, melodies, lyrics, and our sense of aesthetics.

Mayra: I imagine the music of your respective countries was something you inevitably grew up on. What were some of the artists you grew up listening to?

Mayra: Did Spanish language music have any influence on this album? Can you point out specific sections of the album?

Pablo: Not so much the language. We always talk about picking the right time to incorporate Spanish or Portuguese directly into a song. Just hasn’t happened yet. Maybe on the next album.

Mayra: What Latino artists inspired you on this album, or generally?

Pablo: Mercedes Sosa was on my mind a lot during the writing of this album. Her voice has always had this forcefulness to it that feels soothing at the same time. There’s an aspect of my songwriting or maybe melodic choices that draws from that vibe. It’s also fair to say that Omar Rodríguez López was an inspiration for us on this album since At the Drive-In and The Mars Volta are massive influences for all of us. I also think his solo work is amazing.

Mayra: Adam, Atlanta is known as a major center for Hip-hop music and culture, but how has it impacted you as a musician in a heavier genre?

Adam: I was definitely influenced by Atlanta hip-hop. Some of my favorite Atlanta artists are Outkast and Goodie Mob. I’m sure the rhythm and flow of Atlanta hip-hop is deeply embedded in my subconscious and somehow makes its way into how I hear and play heavy music.

Mayra: Are you from Atlanta originally? How did you end up in the music spaces you roam today?

Adam: I’m originally from the Atlanta area. I found my way into Irist by playing with Pablo in an indie rock band. While playing in that band we found out that we also shared a love for heavy music. I had been playing drums in other Georgia bands for years but was glad to drop the sticks for a pick being that guitar was the first instrument I ever learned to play.

Mayra: Can you give us a timeline of how all the current band members came together?

Pablo: I met Bruno around 10 years ago after joining his punk band. After that band folded, we stayed friends and continued collaborating with each other on various projects. I met Adam after I joined his indie rock band in 2014. In 2015, I started the project that would eventually become Irist with Bruno. I asked Adam to join shortly after. Then in 2016, Jason joined the band, and Rodrigo was the last to join in December of 2017 after our original vocalist quit.

Mayra: Do you all have a specific songwriting process?

Pablo: I usually write our initial demos at home. Rodrigo will then add vocals and after that we really get down to the nitty gritty of song structuring in Adam’s basement studio. We’ll experiment with different arrangements and rerecord drums with Jason. After a few weeks we’ll usually end up with a demo that’s pretty fleshed out. We like to let our demos sit for a good while before coming back around and fine tuning. Our whole process takes forever, but when you’re as neurotic as we are it’s the only way to approach it. Fortunately, it’s paid off for us because we’re really happy with how the album turned out.

Mayra: What do you think led you all to gravitate towards each other as musicians? As people?

Pablo: That’s a really good question. I think the common denominator is that we all have some level of respect for each other. Every idea is heard and explored and that tends to lead to trust; both musically and personally. Aside from that, every member of the band has had to make an effort to push their ego aside and put the vision of the band first. Without that approach, this whole thing just wouldn’t work.

Mayra: What are some of the artists you’re all currently listening to?

Pablo: Lately, I’ve mostly been listening to Oranssi Pazuzu, Slift, Bambara, Cultura Tres, Kverlertak, Whispering Sons, and Tropical Fuck Storm to name a few. Not too much heavy stuff at the moment, but that tends to waver depending on how I’m feeling.

Mayra: I know the music industry is sadly on hold, but with hopes that things will eventually get better, do you all have any plans on touring? Would Latin America be a possibility?

Pablo: Absolutely. We technically have two shows announced for the fall, but we’ll have to see how things develop with the Coronavirus pandemic. Latin America would be an absolute dream! It’s hard to bank on anything right now, but we’ll do everything in our power to get down there eventually.

Mayra: If things take longer than expected, how do you guys plan to remain engaged with your audience?

Pablo: Without being able to rely on touring, I think social media will be our only option. It isn’t much of a substitute for getting on the road, but we can at least stay somewhat engaged with people that may be looking for a small distraction from what’s going on in the world right now.

Mayra: How are you all spending quarantine time? Are there special projects you are currently working on?

Pablo: I’m fortunate to be able to say that we’ve managed to remain super creative while in quarantine. We’ve recorded several new demos that I’m sure will be seeing the light of day at some point.

Mayra: Where should fans follow you to stay up to date?

Pablo: You can find us on pretty much all social media platforms.

We want to thank the guys from Irist for taking the time to chat with us, and hope you all take the time to check out their debut album below!