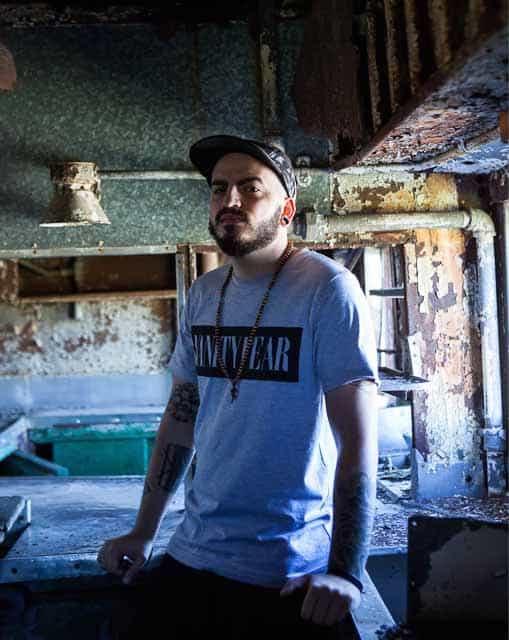 Hip Hop has a brand new artist and it’s one unlike any other. NY based hip hop rapper Upgrade HipHop or a.k.a. Upgrade, has emerged into the scene with a powerful and deeply emotional take on music. The openly honest rapper has re-released his 2014 album titled Chemical Imbalance via Equal Vision Records (signed by Josh Eppard of Coheed and Cambria). The rapper has suffered from multiple mental disorders and hopes to have his album shed a light on the topic. Raw and unfiltered, Upgrade HipHop wears his pain on his sleeve. We had a chance to chat with the rapper on his new album, its significance, his stance on hip hop and his future tour.

TSL: I know that you have battled mental illness over the last couple of years and that this album marks a huge beginning for you. Can you share what’s the importance of this album in your life?

Upgrade: I’ve battled mental illness for as long as I can remember. Depression, Anxiety, Panic Disorder and all the fun times that come with it.  I’ve been on and off all kinds of meds, in and out of hospitals just trying to stabilize my life. This album is more important than anything I’ve done so far because I finally took the curtain down and shed light on what’s haunted me for so many years.  I didn’t only make this album for my own empowerment but to also help others out there who go through similiar struggles, any kind of struggle in general, because I always went to music as an outlet myself when I lost all hope.

TSL: What was it like to finally stabilize your anxiety and get back into the studio? How has music helped you?

Upgrade: I dont like to really say I’m cured or “better” now because it is, and always will be something I struggle with.  I just got to a point where if I wanted to do music, I would have to leave my house eventually in order to be heard. Music helped me be an individual and truly gave me meaning and a reason to live.  Its my escape, my entertainment, my passion and an outlet to release everything that goes on in my mind. Its funny how performing is my favorite thing to do when most people would think it would trigger the anxiety but in a really weird way, on stage is where I am most comfortable.

TSL: What is your favorite track off of the album and why?

Upgrade: The first track “Side Effects” because I feel like it really sets the tone and brings together the message that leads off the album and straps listeners in to prepare for the rest of the album.

TSL: What message are you trying to get across to others who might be facing mental illnesses?

Upgrade: I want to say what others feel they can’t.  I know what it’s like to not be able to leave the house, to be scared of everything, to feel trapped inside your skin, to go through withdrawal from getting off meds, to seeing countless doctors and therapists trying to convince them there was something wrong with me, to hiding from how I really feel and putting on a mask everywhere I go.  I want people to know they aren’t alone and that their struggle is just as real as any other disease. But on top of it all, I also want to show others that there can be light at the end of the tunnel.  I don’t want anyone to hide anymore.

TSL: Besides the topic of mental illness, what other topics do you touch upon in the album and why?

Upgrade: I talk about some of my views on love, heart break, general everyday struggles from having a hard time paying rent and shitty jobs I’ve had in the past.  Everything will always be authentic to what I experience in life.  Its a very human experience.

TSL: When we analyzing the hip-hop world, so much of what mainstream hip-hop glorifies is sexual representations of females, wealth and power while here you are sharing your vulnerability with the world. How do you feel about the Hip Hop genre at the moment and how do you wish it would change or stay the same in the coming years? How do you feel about the fact that mainstream Hip Hop lacks substance in the message it gets across?

Upgrade: I feel like hiphop is better than ever.  The majority of the mainstream has always lacked variety, but it has its place and it’s fun to listen to.  I would like more balance, but I feel like the internet has helped that in a major way. Artists are getting credit for being original or unique, while at the same time a lot of the same is being recycled. I feel like me personally, I had to be the realest ME that I could be. To me, that is the most important feat in music, just being yourself.  Not everyone will like you but they have to respect you if you are yourself because no one can tell you that you can’t be you. I wouldn’t love what I did if it was fake or trying to be something I wasnt.

TSL: What are a couple of career highlights?

Upgrade: People reaching out to me and saying how my music has affected them during hard times has been the biggest highlight so far.  I’ve had great times performing at sold out shows and opening for major acts like Mac Miller and Big Sean but nothing compares to connecting with the fans on that level.

TSL: What are future plans, musically and personally?

Upgrade: I want to keep building, never feel comfortable and continue to grow musically and personally.  I work on myself just as much as I work on my music. I don’t want to be put into a box or be predictable, but I will continue making the best possible music I can.

TSL: When will you start touring and where will the tour make stops?

Upgrade: We are aiming for late fall/early spring to start touring and I hope it stops in every city town and state possible, all over the world.  I want to spread the music as much as I can in anyway I can. I might pick up a new language so I can start dubbing my own albums, haha.

TSL: Where can we keep up with Upgrade Hip Hop?

We want to thank Upgrade HipHop for his time and if you’re in the city, Upgrade will be performing at Webster Hall on November 20th!