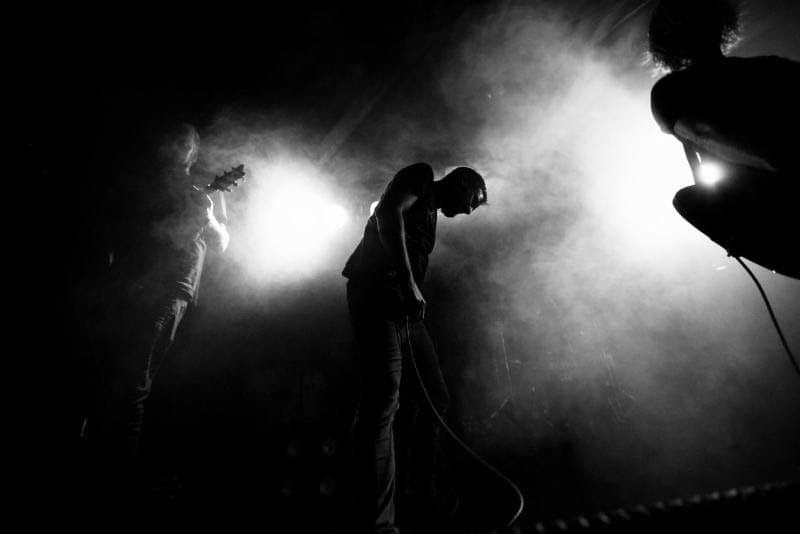 The Ocean’s Robin Staps has been busy not only with his own project, but also signing new heavy/post-rock talent to his record label, Pelagic Records. The doom/post-rock/metal guitarist took some time to discuss his musical and philosophical influences, Pelagic Records and new artists on the rise.

TSL: For readers in the states, can you tell us a little bit more about The Ocean? How did you guys come together?

Robin Staps: THE OCEAN COLLECTIVE started out as a collective of varying members back in 2001. At times we had 3 or 4 different guitar players in the band, as well as a pool of classical musicians that were somehow part of the band, but not permanent members. Over the years, the collective was consolidated into a more consistent band lineup, though we always played with different people, and there have always been a lot of people contributing that were not band members, but still very important towards creating what we do – guest musicians, video artists, lighting designers, classical players, etc.

TSL: Your albums are so loaded with philosophy and science in order to critique religion. What led to the band forming concept albums on this topic?

RS: I guess that just happened. I’ve always been interested in albums that have a conceptual red thread going through, and that are exploring a certain theme in-depth, and at one point I wanted to do this with my own music and art as well.

TSL: As mentioned before, the band draws from philosophy to form this critique. What are some of the bands favorite philosophers and if you have one, what is your favorite work by them?

RS: Most of my lyrics are quite abstract and personal, and rather emotional than analytical. But I am an avid fan of Nietzsche and have implemented a lot of quotes and references into the lyrics of all of our albums. “Wille Zum Untergang” for example off Anthropocentric is a Nietzsche reference, “Rhyacian: Untimely Meditations” off Precambrian is full of Nietzsche quotes, and the 3 “The Grand Inqusitor” chapters on “Anthropocentric” are referencing the chapter of the same title in Dostoyavsky’s “Karamasov brothers”. Though most people wouldn’t file the latter under “philosopher” necessarily, he is one of the greatest connoisseurs of the human psyche to me; and in that, a brilliant philosopher.

TSL: Lets switch to the musical side, who are some of your favorite musicians? Who inspires you in the music world?

RS: These days I listen to a lot of electronic music. I’m really into a specific sound and vibe explored in the contemporary Berlin downtempo scene, by artists like Schmeckefucks, Nixe, Moji, Ipek, Acid Pauli, Rey & Kjavik and this kind of stuff. I also listen to a lot of dark and jazzy things like Kilimanjaro Darkjazz Ensemble, Hidden Orchestra, Bohren… As for guitar music, a lot of the stuff we have released on Pelagic this year represents my taste quite well, obviously ..

TSL: I think it’s so important to have music with heavy substance such as the music that The Ocean produces. Given the world’s current state, what do you hope listeners and fans take away from your music?

RS: Some personal relevance, for this is the most one can get out of music. Great ideas and great lyrics are worthless if they don’t resonate in the individual mind and soul. We are not trying to give lectures or teach philosophy. I write about what I care about, and if other people can relate to that, or some of it, then that’s the greatest achievement possible.

TSL: I know you also have your own record label, Pelagic Records, with some awesome artists on the roster. What are some bands and albums that readers should check out?

RS: Definitely check out Briqueville’s sophomore album, aptly titled “II”. They are a heavy instrumental band from Belgium that is more on the metal than on the post rock side of things. They play with robes and masks live and really create this super intense cathartic and hypnotic live experience that will just totally blow you away. I saw them live at Dunk and got excited like I haven’t been in a long time. You can stream the full album via Decibel.

TSL: Other than that, check out the new YLVA record. Incredible, super heavy new band from Melbourne. If you are into early Cult Of Luna or Times Of Grace -era Neurosis, this is up your alley. Stream the album through Revolver.

RS: Another great Australian band is Lo! from Sydney, who have just released their 3rd album “Vestigial” through us 2 weeks ago. Their bass player is a movie producer and so they always come up with great and unique video ideas. Definitely check out their clip for “Orca” on Youtube, where vocalist Sam Dillon emerges as a vicious creature from a vat of shiny pink goo, in front of an otherwise completely black background. The clip went viral over the love-it-or-hate-it discussion of whether or not pink belongs into metal, that followed hot on the heels… but even the haters had to admit that this clip, premiered via Noisey, Metal Hammer and Decibel, showed a truly outstanding and innovative approach to visual arts in heavy music.

TSL: In The Twilight, These Rocks Have Teeth was released late last month featuring some of the bands on the roster and some previously unreleased tracks from The Ocean. How was the process of compiling materials for the album? What inspired the album cover art by Max Löffler?

RS: The idea to put together a compilation that reflects our label’s roster is already 2 years old now, but it took forever to put it all together. Our goal was to create a really listenable playlist that showcases everything we have to offer… Pelagic artists range from mellow post rock to soundtrack music to super heavy stuff, so it was quite a challenge to combine this all under one roof… we decided to split it up to 2 sides: “In The Twilight…”, the first CD/playlist focuses on the more calm, post-rock oriented side of the label, while “… These Rocks Have Teeth” showcases the heavy stuff.

Max artwork takes up this dichotomy and the title in a quite abstract but [in a] very cool way.

TSL: Do you have any upcoming collaborations with other artists on your label roster?

RS: No, there might be a second part at one point, we have already signed almost 10 new artists since the compilation was initiated… but in the near future, we have new albums coming up.

TSL: Is The Ocean touring anytime soon? Do you plan on touring the States?

RS: Not really. We are currently working on 2 new albums, which will be released in 2018 and 2019. Until then, we won’t tour much. If a good US offer with a band we really like should come through, then we might change our minds, but our main focus is the new record now. We have played close to 300 shows on our previous record “Pelagial”, that’s really more than enough, haha… it’s time for something new.

TSL: Where can readers keep up with The Ocean?

We would like to thank Robin Staps for taking the time to chat with us.

In The Twilight, These Rocks Have Teeth, a compilation of one-hundred-eighty minutes showcasing the entire Pelagic Records roster including Mono, Pg.Lost, Klone, and Wang Wen is now available here.