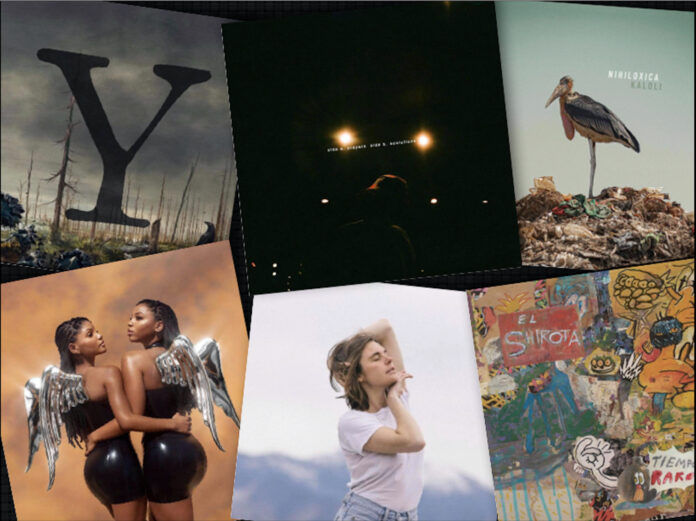 This weekend saw a few releases from a variety of artists; from deathcore to jazz, here are 10 albums to stream right now. Note: these are not listed in any order of preference.

Okay, this may not be an album, but it is the final EP in a set of 5 consecutive EP releases by The Acacia Strain. Y includes the tracks “One Thousand Painful Stings,” which features Courtney LaPlante, formerly of Iwrestledabearonce, and “EARTH WILL BECOME DEATH.”

The Acacia Strain has also announced a new album titled Slow Decay set for a July 24 release. Slow Decay will feature all 10 songs from the five previously released EPs, plus two new songs titled “Crippling Poison” and “Birds of Paradise, Birds of Prey.”

Pop/jazz singer-songwriter Norah Jones released her eighth full-length album titled Pick Me Off The Floor via Blue Note Records. In his review of the album in Variety, Lior Phillips states, “While it may not be soundtracking any marches or precisely match any singular breakup, Jones’ latest captures big-picture feelings of anxiety, fear, loss and hope. “Pick Me Up Off the Floor” is a cohesive journey reflecting both tragically and sweetly on the amorphous cloud of heartache that lingers in these moments of pain, offering a hand to help us out of the fog.”

R&B duo, Chloe x Halle, released their second studio album titled Ungodly Hour. The R&B duo were introduced to larger audiences when they were featured on Beyonce’s Lemonade after covering B’s “Best Thing I Never Had” when they were just 13 years old. Hard to believe these sisters are just 20 years old today, but a joy to know they have many years left of making soulful music.

The French folk singer-songwriter Francesca Blanchard’s second studio album Make It Better captures all the pain and sorrow of a heartache and packages it into a sweet and catchy 9 song album. Perhaps the catchiest we’ve heard in awhile, we believe Blanchard deserves many more listens- just hear for yourself.

Based out of Mexico City, El Shirota bring back nostalgic vibes with their shoegaze/post-hardcore, going back the grungy sounds of the 90s, but this time in Spanish! Support the underground Mexican music scene by giving them a listen.

Nihiloxica introduce a combination of electronic music with tribal percussive elements from the dark side. Taken from their main website, the group writes: “Kaloli is the debut full-length LP from Kampala’s darkest electro-percussion group Nihiloxica on cult Belgian label Crammed Discs. The album marries the propulsive Ugandan percussion of the Nilotika Cultural Ensemble with technoid analog synth lines and hybrid kit playing from the UK’s pq and Spooky-J. The result is something otherworldly. Kaloli journeys through the uncharted space between two cultures of dance music, where the expression of traditional elements mutates into something more sinister and nihilistic.”

Full of beautiful textures and tones, Gia Margaret’s debut album Mia Gargaret is a creative take on ambient music, taking samples from different forms of media and combining them with her own musical arrangements.

Although still pretty fresh, the soulful James Deacon has already caught the ear of many listeners after being included on Spotify South Africa Rock Essential’s playlist.

UK based rapper Jay Prince’s new EP prayers & soulutions may be the sense of hope we all need during these troubling times. His spoken word/raps come from a place of pain and true hope for better times.