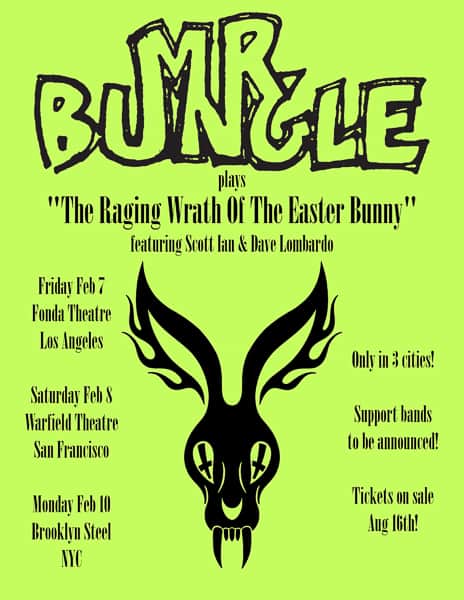 Mike Patton’s experimental rock side project, Mr. Bungle, is making a return by playing three shows in select cities next year. The dates are: Feb. 7 at the Fonda Theatre (Los Angeles), Feb. 8 at the Warfield Theatre (San Francisco) and Feb. 10 at Brooklyn Steel (New York City). The dates mark both the first time Mr. Bungle has performed in close to 20 years and the first time these songs have been played live in over 30 years.

About being asked to play with Patton, Ian states, “When Mike hit me up about this my brain thought he was asking me if I wanted to come to a show, him knowing I am a HUGE Bungle fan. When I realized he actually meant for me to play guitar with them it broke my brain, I was a giggly drooling mess. Somehow I pecked out Y E S on my keyboard and holy crap I’m playing in Mr. Bungle. Seriously, it’s an honor and a privilege to get to play with my favorite ‘Mr.’ band of all time.”

Tickets are on-sale this Friday, Aug. 16 at 10 am local time. There will be no additional cities added to this itinerary.