This Will Destroy You Confirms Spring 2017 Tour Supporting Deafhaven 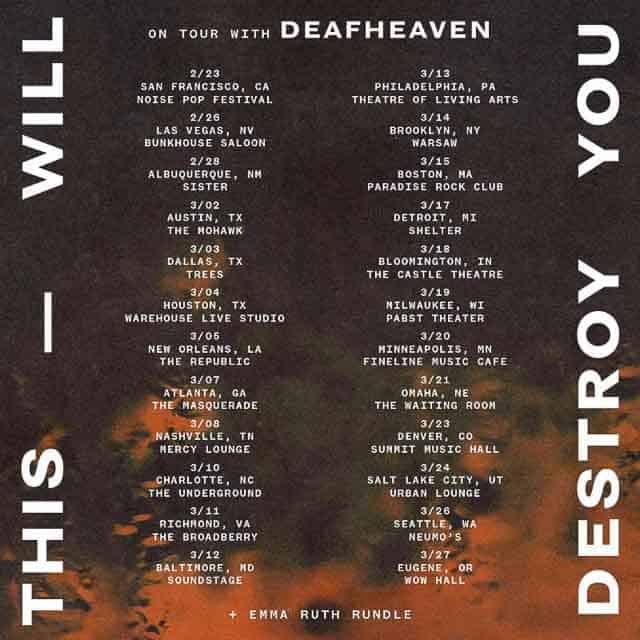 Texan instrumental rock collective This Will Destroy You has just announced an upcoming US tour supporting Deafheaven and Emma Ruth Rundle, set to take place in February and March.

Following the special 10th anniversary edition of their defining Young Mountain LP, which was released through Magic Bullet Records in November, This Will Destroy You embarked on a series of shows to commemorate the re-released album in select cities around the US with sold out performances in San Francisco, Los Angeles, Austin, and two shows in New York City. On these shows, the band performed Young Mountain in its entirety back-to-back with a full performance of 2008’s self-titled album.

This Will Destroy You will be serving as direct support for Deafheaven for all twenty-four shows, beginning at Noise Pop Festival on February 23rd, in San Francisco, California and winding counter-clockwise through the country through March 27th, ending in Eugene, Oregon.

Magic Bullet Records’ special reissue of Young Mountain includes a previously-unheard song entitled “Sleep,” recorded in 2006 during the initial tracking sessions for the album. You can purchase the digital version of the album here, on CD here, and on vinyl featuring copper metallic inks and a UV gloss flood across a traditional LP jacket here.

THIS WILL DESTROY YOU w/ Deafheaven:

3/10/2017 The Underground at The Fillmore Charlotte – Charlotte, NC

This Will Destroy You on social media: