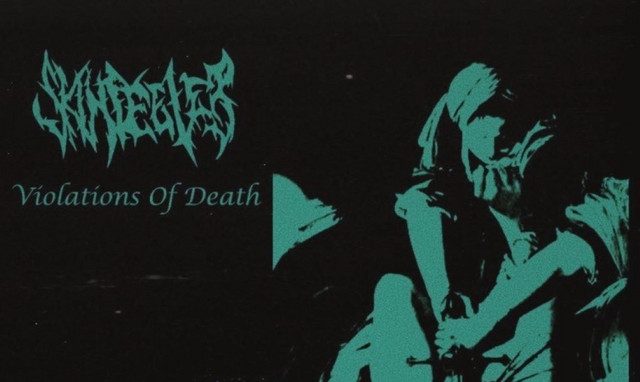 My first introduction to San Antonio’s Skinpeeler was photographing them for the local hardcore festival Heavy Hitters 3 in Austin, Texas. Seeing X’s on some of the band member’s hands made me realize just how young they were- not even old enough to drink. What were they doing playing at a brewery?

It didn’t take long before I realized just why they belonged at this fest. Their sound was immediately dark, and doomy. Before I got used to the flow of their music, they would switch both genre and vocal stylings. The diverse influences on their music, from doom, to hardcore, to death metal, made the fact that so many of the band members were underage that much more impressive.

A new wave of hardcore and death metal is currently brewing, with the boom of bands like 200 Stab Wounds, and Texas in particular is making their own wave of death metal with bands like Tribal Gaze. Outside of my periphery, I now realize that the is an entire heavy scene developing, particularly based in San Antonio, and one that has many younger, up-and-coming bands coming into the periphery. Skinpeeler being one of these bands making waves in the local scene.

Skinpeeler will be opening up for bigger bands in no time. Just take a listen to their short, but incredibly sound varied EP “Violations of Death.”