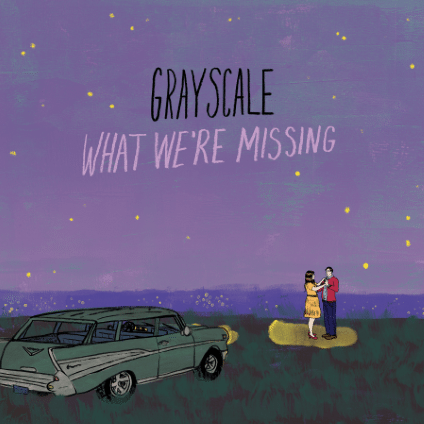 To anybody who was a teenager during the emo/pop-punk revival of the mid-2000’s, alternative guitar melodies and melancholic lyrics hit a bittersweet spot in our heart. If you’re one of those teenagers, then I’m sure you’ll dig up and coming pop-punk band Grayscale who’s recently released their debut album “What We’re Missing” on February 12th. Out of the Philadelphia punk scene, Greyscale bring a fresh young sound that’ll make anybody reminisce on the past decade. I had the opportunity to listen to their newly released album and wrote a track-by-track reflection.

Track 1- Tense: The guitar arrangement immediately brings you back to the 2000’s, soft until the vocals climax with high emotions. A song that lays the emotional context of the entire album from the start.

Track 3- Midwest: A very common theme of heartbreak is apparent and the stronger vocals make the emotion seem real to the listener.

Track 4- Say Something: The softest song on the album but there is something about his softer vocals accompanying the softer guitar rhythms that make it catchier and perhaps even radio friendly.

Track 5- Change: The instrumentation will be pleasurable for any Brand New fan.

Track 6- Catholic: Musically I wish there was more variety in their arrangement. This song is very similar to past songs on the album.

Track 7- Bloom: Upbeat and catchy but nothing setting it apart from the rest of the album.

Track 8- Irish Curtains: Lyrically very raw. The emotion this song conveys, from the soft guitar and the depressed lyrics, is what I wish they were able to deliver on every song. Hands down, the best song on the album.

Track 9- August Love: I love that the band can take the listener on this emotional roller coaster and right when you think you’re going to end on a sad note, it brings you back up again. This is the song that ends the album with hope, regardless of all the heartbreak they just vented out to the listener.

Grayscale definitely has potential to make it bigger and songs like “Irish Curtains” proves that. Personally, I wish that kind of emotion was delivered on every song. The band opening up to fans through their album is great though, and very appealing to the audience this genre often reaches out to. They are definitely worth a listen because any fan of the pop-punk revival would appreciate flashbacks of their childhood. Grayscale are a band trying to keep the pop-punk revival alive and they are doing their best with their debut release. Make sure to find out more about the band in Alternative Press’ latest article on them.