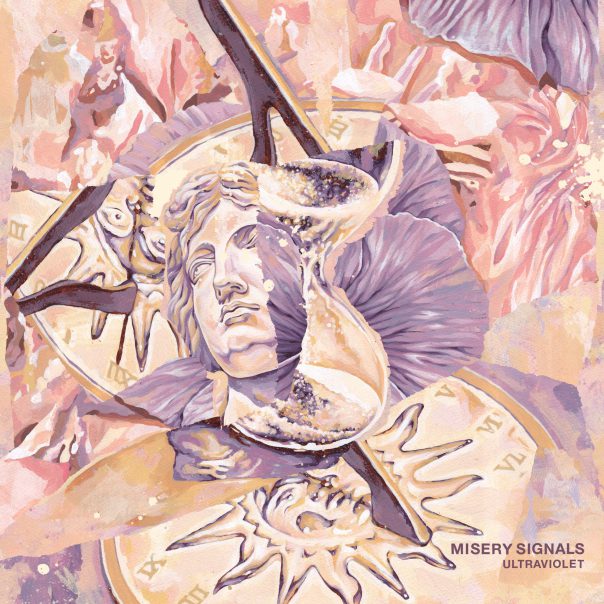 One of the most acclaimed metalcore bands, Misery Signals, has released their fifth, full length album titled Ultraviolet after a 7 year break. The band is known for their innovative and cross-genre experimentation which quickly made them a favorite amongst metalcore fans as well as one of the most respected due to their highly technical musicianship.

Ultraviolet has been highly anticipated and comes as a much needed musical relief during the times of covid-19. Below are some of our thoughts on the band’s return album, what it says about the genre, and the legacy of Misery Signals.

1. The Tempest – The first single unveiled by the band back in May, is a throwback to the Misery Signals we know and love; abrasive and ethereal all in one track. Accompanied by positive lyrics and beautiful clean vocals toward the end, “The Tempest” is the perfect track to introduce the album.

2. Sunlifter – This track offers insight into new aspects of Misery Signals sound and displays their evolution as a metalcore giant. The many layers and small details make this song a gem.

3. River King – Once again, the band displays new dimensions of their sound, including perhaps some Katatonia influence.

4. Through Vales of Blue Fire – A beautiful angry and melodic composition that feels like an interlude to the second part of the album.

6. The Fall – Not the most memorable track on the album musically, but it is the most evolved song lyrically, displaying Zaraska’s growth as a writer.

7. Redemption Key – Channeling their inner Anathema, the band expands to ethereal, spacey rock with this song’s intro. Lyrically, this song expresses much needed hope in the wake of covid-19.

8. Cascade Locks – Not the most innovative song musically, though lyrically it touches on the need to embrace difficult moments of heartache and loss, once again following the hopeful theme of the album.

9. Some Dreams – The most emotional song on the album as one considers the band, particularly Zaraska’s past. I believe this song is inspired by Zaraska’s dear friend, former Compromise bandmate Jordan Wodehouse who tragically died during a car accident in 2002.

Overall opinion: An 18 year long trajectory has cemented Misery Signals as an underground metalcore pioneer and icon. Ultraviolet took seven years to be released as all members of the band live in separate cities and have full-time jobs; besides the fact that this album was anticipated for such a long time, the album showcases important aspects of what it means to be an artist.

First, the length of production time that the album took speaks to the perfectionist work ethic that Misery Signals is known for; every album showcases the band’s attention to detail and every band member’s dedication to their role in the band. Second, the album proves the band’s love, passion, and dedication for music as well as their commitment to art. Because the band does not make a living off of music, the continuous commitment to the creation of their music displays their love for the art without interest in its capital.

While it is not my personal favorite Misery Signals album, the importance of Ultraviolet goes beyond whether the album is a fan favorite; it showcases the bands musicianship and commitment to metalcore 18 years after their debut, and displays their ability to adapt to change. As the metalcore genre continues to evolve, Misery Signals demonstrates their ability to keep up with the ever growing genre by continuously displaying their multi-dimensional sound in every song on Ultraviolet.

Ultraviolet is now available on BandCamp, iTunes, in bundle format on the band’s main website, and via streaming on Spotify.