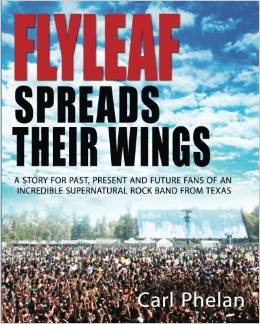 Christian Rock band Flyleaf has achieved great success in its few years since their inception, and now their entire journey has been composed into a book titled “Flyleaf Spreads Their Wings: A Story For Past, Present and Future Fans of an Incredible Supernatural Band from Texas.” The book was written by Carl Phelan, grandfather of Flyleaf guitarist Jared Hartmann and is a chronological biography of the band over its entire career.

The book is truly a treat for any fan of the band Flyleaf. Filled with exclusive photos (from small gigs they played in Texas under the name Passerby), a list of each show played throughout the years, reviews from critics/fans, and an inside look at personal experiences shared within the band. A very unique take on the bands history and remains original within the mix of other music biographies.

The book will leave fans surprised to see how fast the band reached recognition and what bands they were able to share the stage with. It’ll also dig into the bands undeniable Christian belief and what its done for the band as a whole, as well as talking about the departure of lead singer and staple singer of a generation, Lacey Mosley. Also, it’ll give a detailed telling of how and when Kristen May was named the new lead singer of Flyleaf.

A must read for any Flyleaf fan, as well as any fan of Hard-Rock music, as it’ll show the struggles artists have to get through in order to reach success. We don’t want to give any spoilers here, so get your copy now! Order a copy of the book here: https://flyleafbook.com/fstw2014/