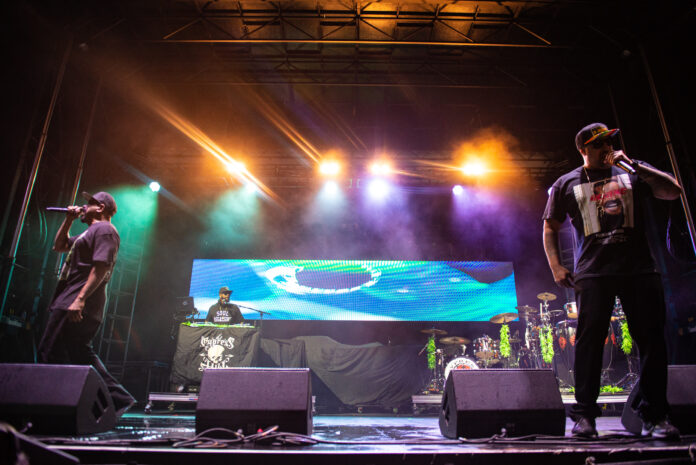 It is hard to think of the hip-hop/rap canon without thinking of Cypress Hill. Even if you are not a fan of their discography, odds are you have heard their hit “Insane in the Brain”; the track is one of the most recognizable songs in popular culture regardless of genre, and was one of the first to openly celebrate the recreational use of marijuana in mainstream music.

The Cuban-American/Mexican-American rap duo is B-real with Sen Dog along with DJ Muggs and Eric Bobo on percussion. After 30 years, Cypress Hill became the first hip-hop group to receive a star on the Hollywood Walk of Fame. While their most recognized song is “Insane in the Brain,” their self-titled debut Cypress Hill (1991) and Black Sunday (1993) are widely considered two of the best hip-hop albums and are progenitors of west-coast hip-hop.

Cypress Hill stopped by El Paso on August 10, 2021 with hip-hop dup Atmosphere as the direct support for their tour. Upon arrival, Atmosphere was already partially through their set and I found myself shocked when the crowd could be heard raping along to the lyrics from down the street. Lead rapper Slug embodies a youthful charisma that draws in fans in a personal way. Incorporating lyrics that touch on insecurity, nostalgia, with a touch of humor, Atmosphere have managed to create a loyal and consistent fanbase throughout the years.

As an outdoor venue, El Paso County Coliseum was perhaps not the best place for an event on a rainy night. It began pouring just as Cypress Hill’s crew was beginning to set up, causing a delay at the start of the show. By the time B-real and Sen Dog took the stage, the crowd was soaked yet they were surely not leaving until they cheered with a joint. The duo performed their most loved hits with a for a total of almost two hours. Given the group’s accolades and making history for Latinos within the hip-hop genre, their presence on a border town with a predominantly Latino crowd felt euphoric, and frankly emotional. As a Latino and Black hip-hop duo with an open love for marijuana, overcoming borders and barriers in order to become one of the most successful hip-hop acts without losing their identity is likely the most important part of Cypress Hills’ legacy.