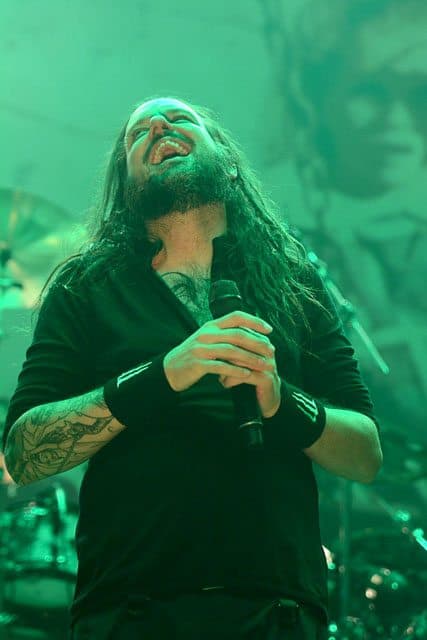 The Wellmont Theater in Montclair, NJ welcomed Korn on October 6th with fans truly excited to see Korn perform. Many of them have followed the band since the beginning of their musical career. The lucky bands to support Korn were Suicide Silence and Islander who joined the band for the 20th Anniversary Tour of their self-titled debut album at The Wellmont Theater on October 6th.

Korn formed in Bakersfield, CA in 1993, taking over the music scene right when nu-metal had first began to develop. They redefined the heavy metal genre and brought their own unique style which would go on to be called Nu-Metal; they are now considered one of the lead pioneers of the nu-metal genre along with Slipknot, Deftones and others. The bands self-titled debut is amongst one of the most recognizable and defining albums of the nu-metal genre. The genre is impossible to be discussed without mentioning Korn. 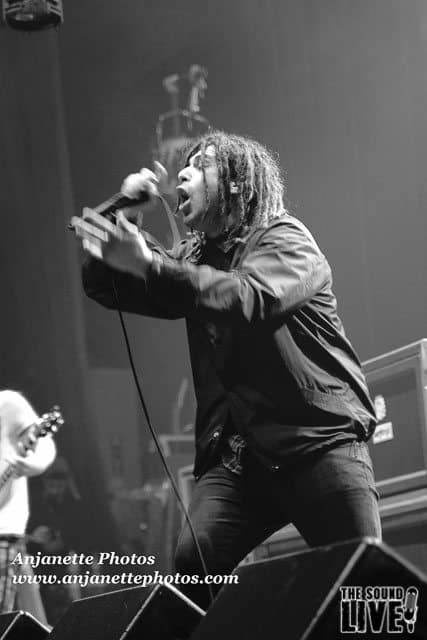 Korn’s tour is a special one for fans who have kept the nu-metal genre alive over the past 20 years. The idea of reliving an era through the sound of music is simply incomparable. The first band to perform was nu-metal band Islander, who formed in 2011 an originally hails from Greenville, South Carolina. The band has slowly built up their fan base, from opening up for bands like Non Point, to better known acts like Seether and now Korn. I recall seeing Islander perform earlier this year at The Gramercy Theater in NYC and at the time thinking: “Wow, these guys are great performers!” The fulfill every requirement of a great live musical act and it’s great to say they’ve only gotten better each time; their performance this time around was even better than the last. Lead singer Mikey Carvajal has a dynamic stage presence and welcomes the audience to sing along and feel the music along with him. Mikey (Vocals) J.R. Bareis (guitar), Joe Rickard (drums), Ryan Pei (Bass) together display passion and soul throughout their performance. They closed out their set with “Coconut Dracula” which seems to be a fan favorite, as everyone in the audience was jamming right along with the band. Check out their latest album Violence & Destruction. Keep an eye out for Islander as they are slowly but surely climbing up the ladder of popularity. 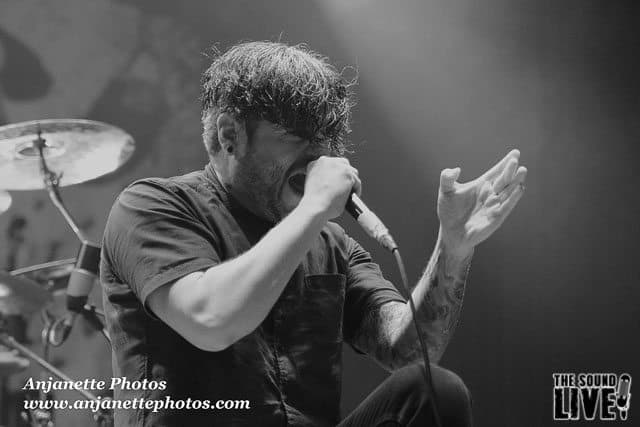 California based Suicide Silence stepped up and conquered the stage. The band formed in 2002 and have since gone through many changes. Unfortunately, they lost their lead singer Mitch Lucker in a horrific motorcycle accident in 2012.  The band felt Lucker would have wanted them to move on and so regardless of the great pain and struggle of having to move on without their frontman, they managed to continue in his memory. They were determined to rise above their loss and once again rejoin the music industry.  They returned to the studio with new vocalist Hernan “Eddie” Hermida of the band All Shall Perish. In 2014, Chris Garza (Rhythm guitar), Mark Heylum (lead guitar), Alex Lopez (drums), and Danny Kenny (bass) and lead vocalist Hermida released  “You Can’t Stop Me” via Nuclear Records. This marked a great return from Suicide Silence, in good company of an experienced frontman.

Their first two songs of the night were “You Only Live Once” and “Inherit The Crown”, to which the crowd responded by immediately filling up the room with intense energy. Hermidas’ vocals were powerful and thundered throughout the venue. They played songs from previous albums which was a great ode to the work accomplished by original singer Mitch Lucker. “Unanswered” from 2007 The Cleansing got the mosh pit going and the audience was fully immersed in the moment.  Suicide Silence showed gratitude to be sharing the same stage with Korn. They closed out their set with “No Pity for a Coward” off of The Cleansing. Hermida demanded everyone to keep moshing and in order to give a warm welcome to Korn. The night was definitely off to a great start having Suicide Silence warm up the crowd and raising the energy to the next level. 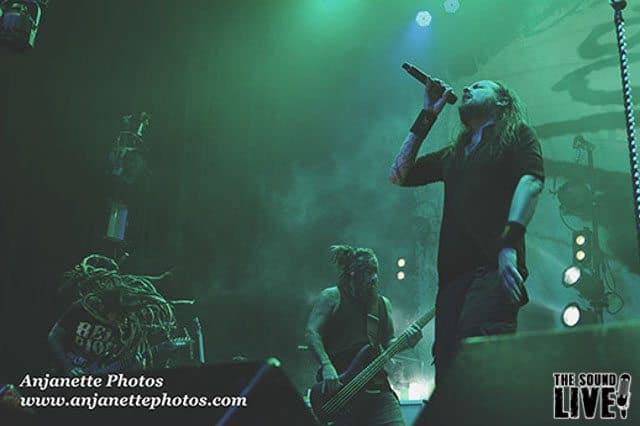 The lights dimmed and fans were shouting “KORN!” until Jonathan Davis (Vocals), James Schaffer (guitar), Biran Welch (Guitar), Reginald Arvizu (bass), and Ray Luzier (drums) walked out on stage. Fans were excited, shouting and ready for the show to get started. Korn kicked off their set with “Blind” as many were head banging and moshing. Next song was “Ball Tongue” followed by “Need To.” Fans were enjoying the show, as the moshing continued and people were capturing the moment with their cell phones. When the popular “Shoots and Ladders” began, the crowd was quick to respond by recording it; memories of a signature song at the 20 year anniversary show is worth keeping .

Many fan favorites were performed like “Falling Away From Me”, which fans sang along to and had the audience crowd surfing looked like a lot of fun. As the night continued Jonathan Davis came on stage and gave the crowd a treat by playing his bagpipes, I thought that was the best part of their set. The last song performed were “Here to Stay”, “Coming Undone” and “Freak On a Leash”, a perfect ending to their show. During the last moments of the show, not one person in the venue was in their seats. Everyone was singing along to all the lyrics, it was a nostalgic moment for many 90s nu-metal fans. Davis thanked the crowd for being with them for twenty years and keeping nu-metal alive. 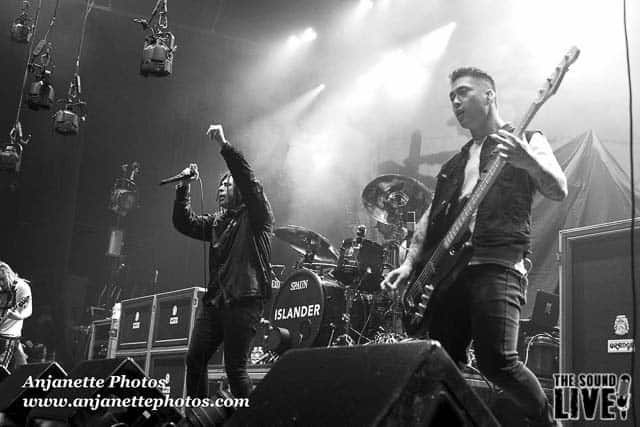 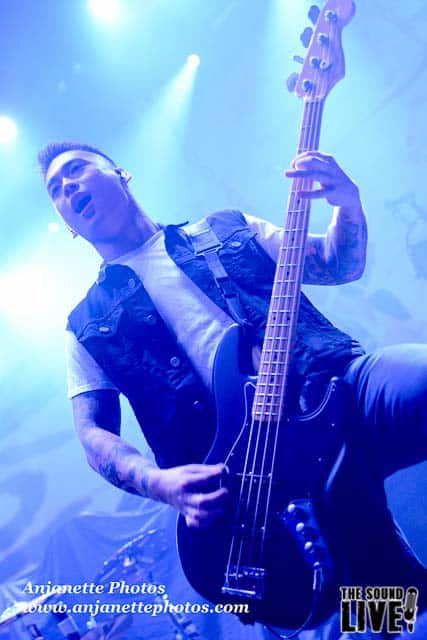 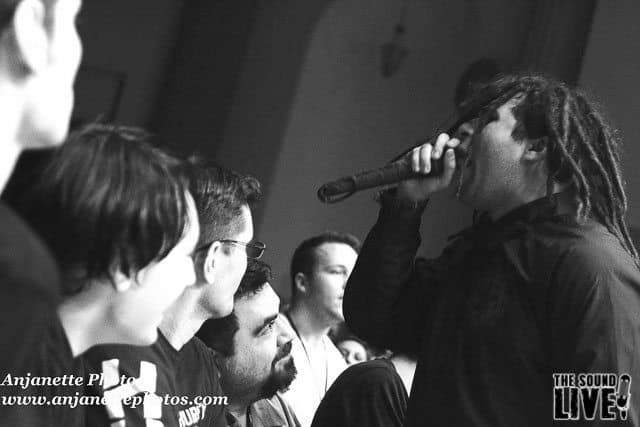 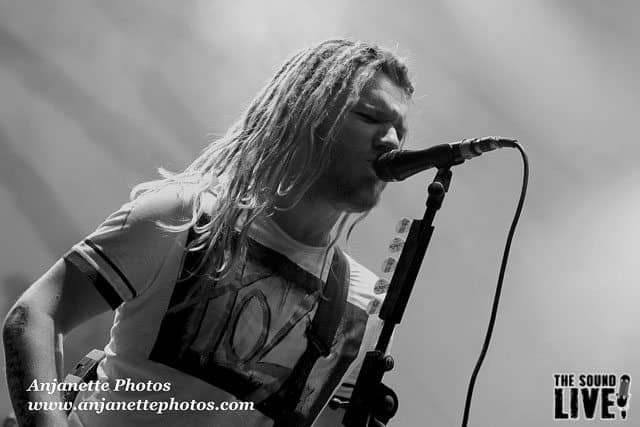 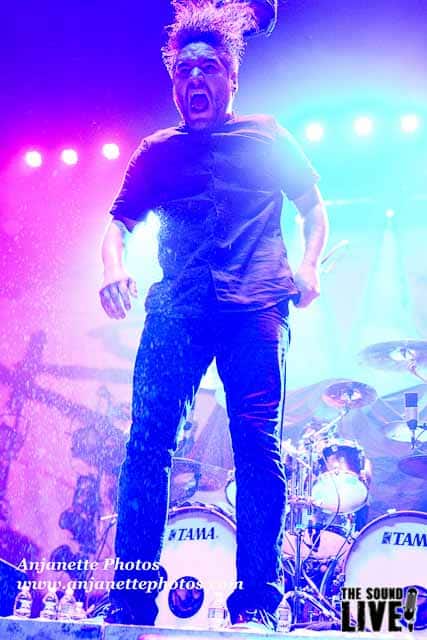 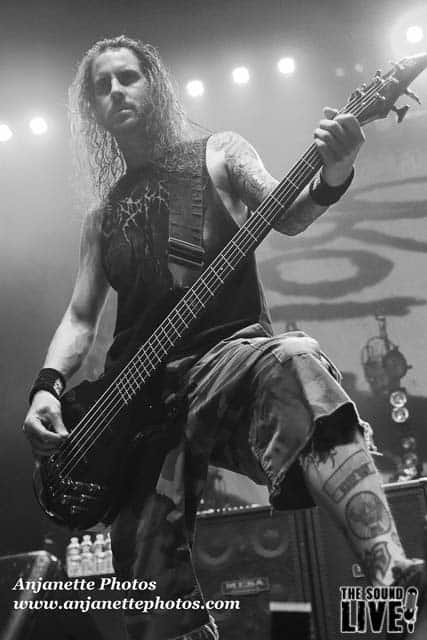 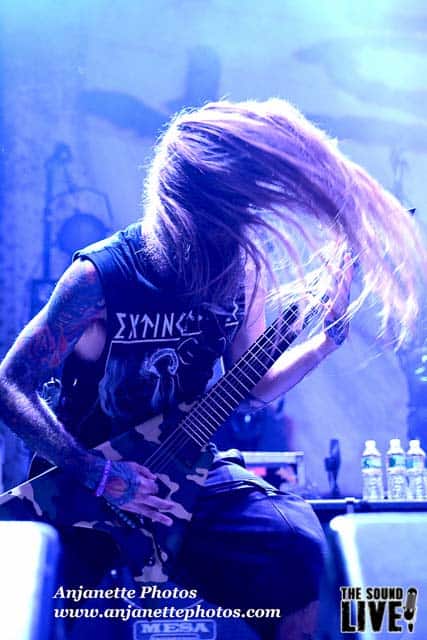 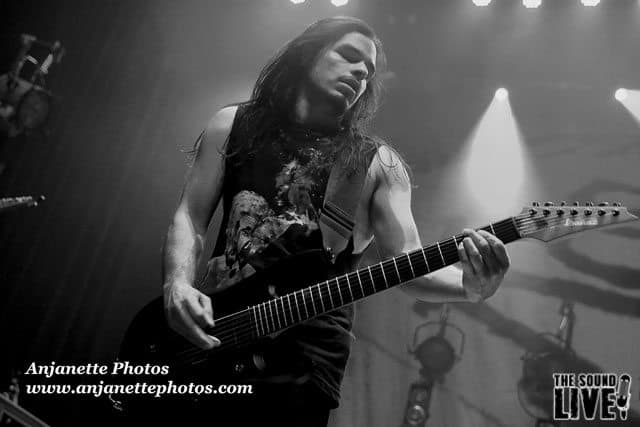 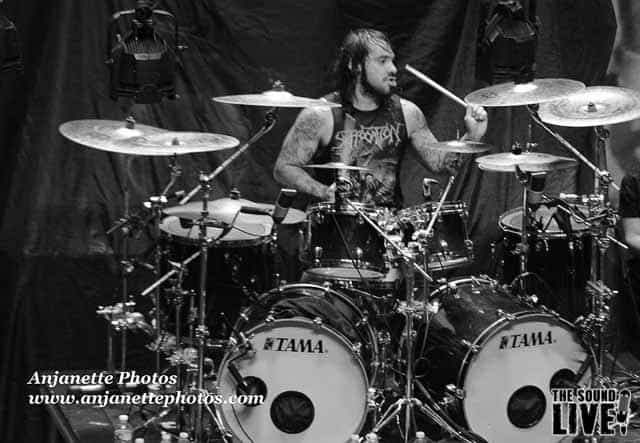 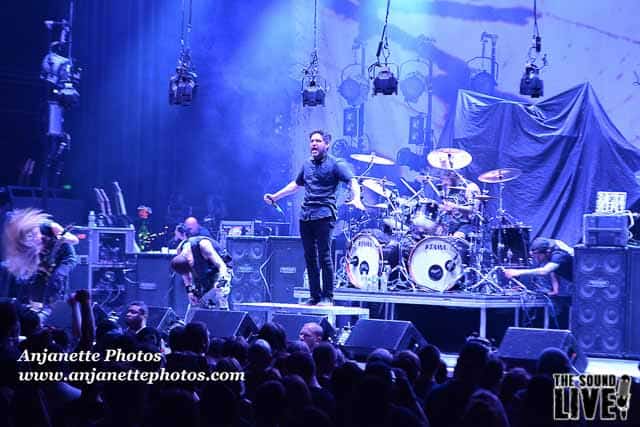 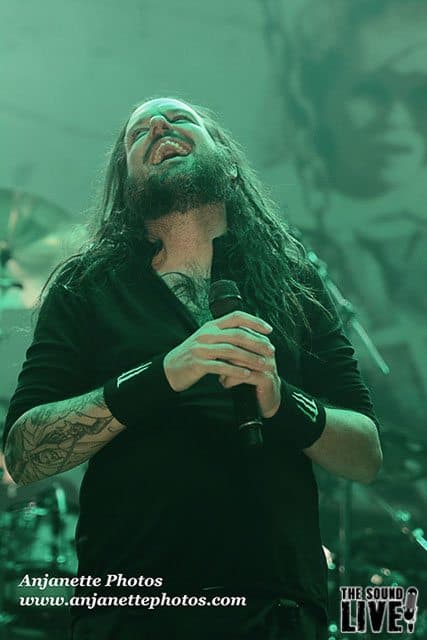 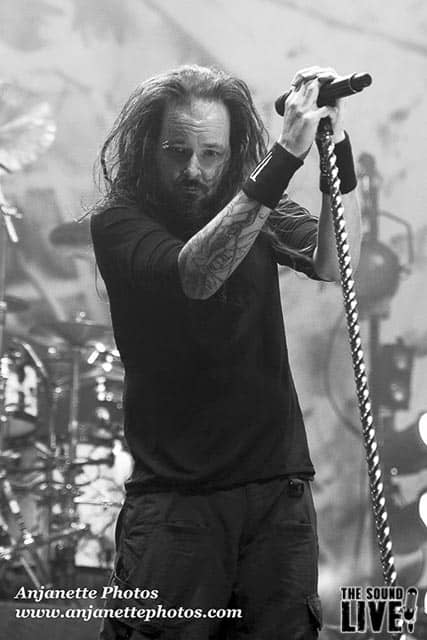 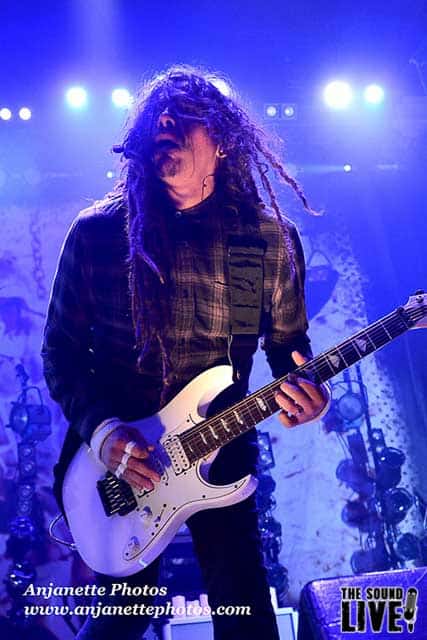 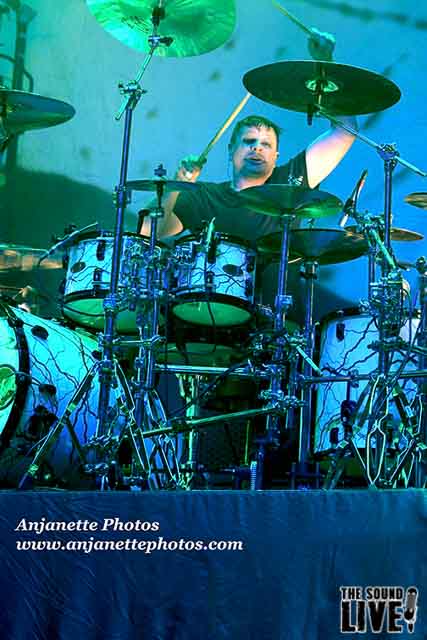 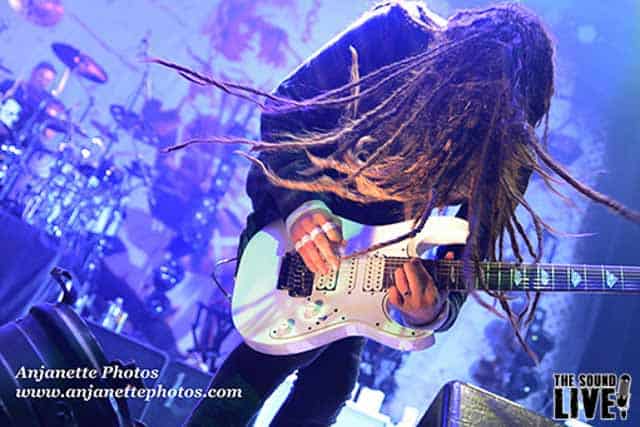 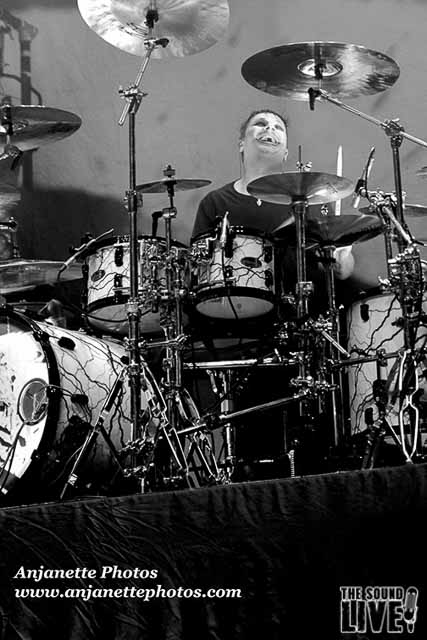 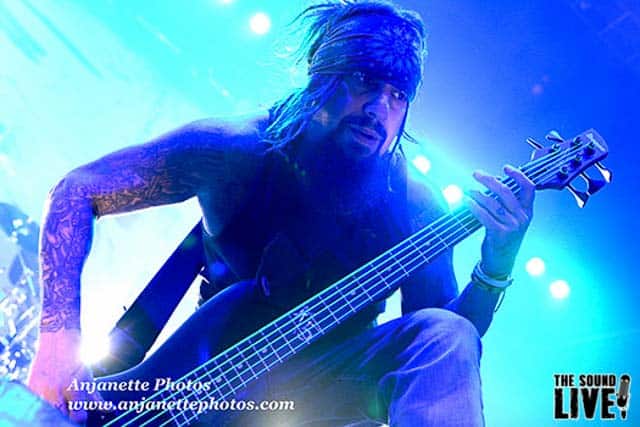 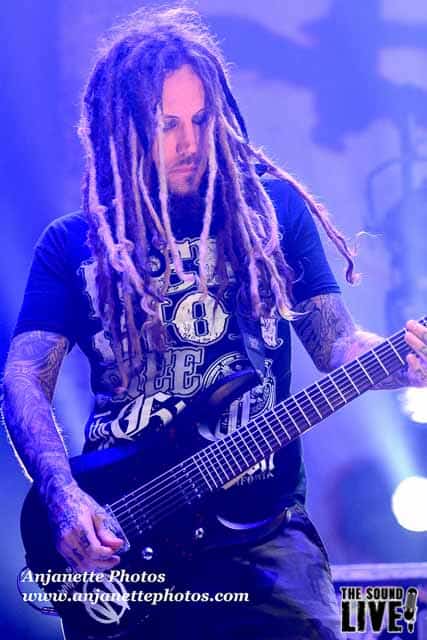 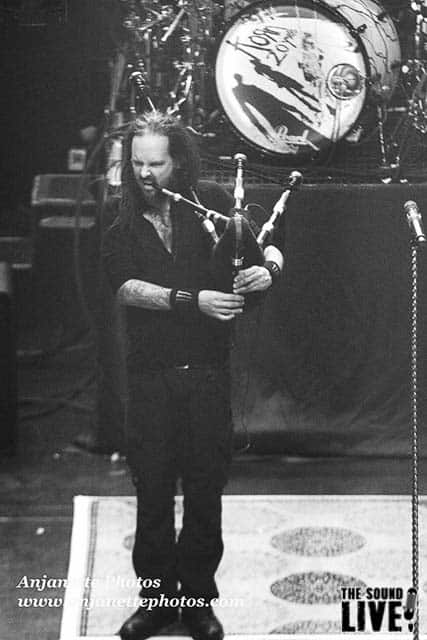