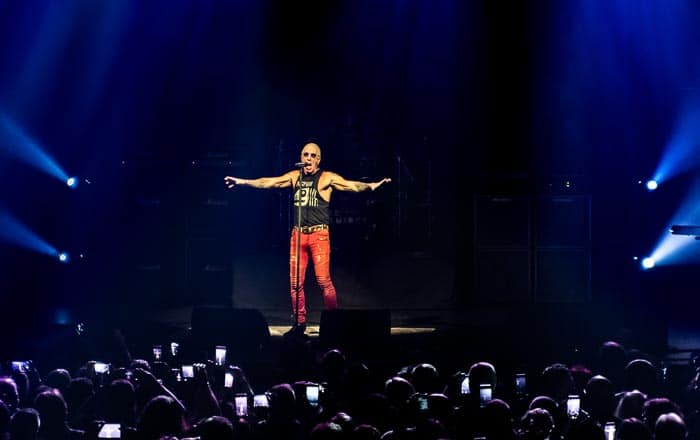 Dee Snider and :::KILLCODE:::, can you say “Ouch”!!! These guys attacked the Northeast on two consecutive nights, November 3rd and 4th, and put a hurting on audiences attending The Paramount in Long Island and The Chance Theatre in Poughkeepsie.  Voices of Extreme joined them at The Paramount as did Amanda Ayala & The Midnight Glory and Freakswitch at The Chance. 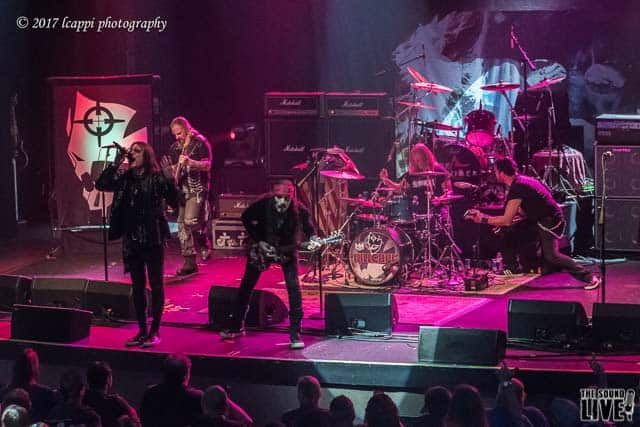 On both nights :::KILLCODE::: opened for Dee Snider. :::KILLCODE::: is the hard-rocking, original five-piece band from New York, featuring Tom Morrissey on lead vocals, guitarists Dc Gonzalez & Chas, Erric Bonesmith on bass, and Rob Geyer on drums. On tour for most of the year, the last time the band played in New York was when they opened for Bret Michaels in early August; since then they have been direct support for Queensryche, played festivals in the UK and Switzerland, and opened for Dee Snider in Connecticut and Ohio.  Their last European show of the year was supposed to be The Hard Rock Hell Festival in Wales on the 9th of November but after their stellar performance last August at The Heaven & Hull Festival in the UK, they were invited to play at The 1st Annual Hard Rock Hell Awards, a testament to their talent, hard work, and dedication.

Now, what can I say about these extremely talented and professional showmen that I haven’t already said except that every time I see them is better than the last.  It is not just their music, they are humble and approachable and their energy and friendliness draw people in, making them new fans wherever they go.  I believe it was Rob Geyer who said that “if you wanna million fans, you gotta shake a million hands” and that is exactly what they are doing.

:::KILLCODE’s::: performances are always energetic and superbly executed, and these two shows were no exception; the band kicked ass with their eclectic mix of musical styles and amazing stage presence (I’m really digging the “Dc Shuffle” that has been going on back and forth across stage).  From the opening chords of “Lita” to the high-octane encore of “Kickin and Screamin”, all of their original songs are high-powered, sing-along anthems accompanied by intricate lead-ins, heavy riffs, and a driving rhythm section.  Their killer set included such fan favorites as “Still Here” “6 a.m. Again” “Shot”, and my personal favorite — “The Answer”.

Exceedingly engaging throughout the set, shaking hands with fans when possible, all the guys, even Rob back there on the drums, encourage the audience to put their hands up and chant along with them:  “When I say ‘KILL’, you say ‘CODE’!!!”.  They had the packed crowds screaming their heads off with fists in the air and horns held high. Hell, they even got the attention of the A.D.D. section in the back of the bar at The Chance.

:::KILLCODE::: has some seriously devoted fans all over the world, but New York is home to the original members of the KILLCODE Krew and as usual, they showed up in force.  I love seeing them hugging the rail and God help anyone who gets in their way during the performance.  While attending the show at The Chance, waiting for the band to set up, I happened upon a young lady (she could not have been more than 14 years old) with her mom right in front of the stage, she was so excited about attending her first rock show and had never heard of, much less seen :::KILLCODE:::, but by the end of their set, she was most definitely a new Krew member.

I like to hang out at :::KILLCODE’s::: merch table between sets and as always it was a madhouse, surrounded by old fans and new.  It’s awe-inspiring to see people come up who had never seen them perform before to tell the guys how much they loved the show, buying merch, getting autographs and asking to take photos with them of which the band always oblige. Like Pied Pipers of Rock n’ Roll, no matter where they go, whether it be in the States, Mexico, or Europe, :::KILLCODE::: continually makes that very important connection with the audience that has fans following them and coming back for more.

For more information on the band, their upcoming tour dates, and to purchase music and some really cool merchandise, visit their website at https://killcode.net. 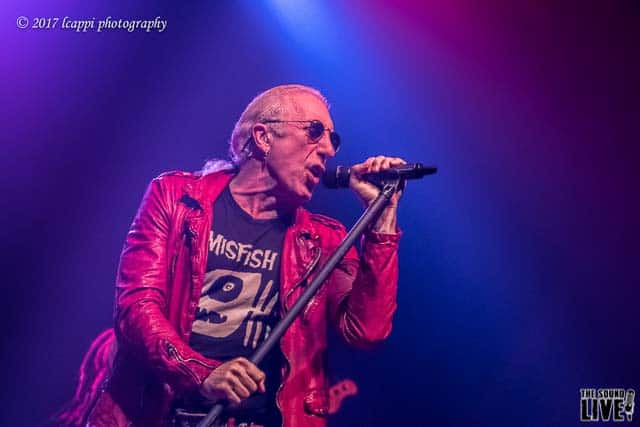 Dee Snider, has spent a good part of this past summer and fall touring and promoting his new release We Are The Ones with his band, guitarist Robbie Angel, bassist Tanya O’Callahan, and drummer, Mike Dupke.  They have visited three continents and eleven countries, covering over 75,000 miles and played to hundreds of thousands of fans. Performing for audiences of thousands and being able to share your music with the world is awesome and shit, but there is nothing quite like coming home and playing for the people who have supported you from the beginning, and this weekend was just that, a homecoming.

We all know Dee Snider as the legendary singer of Twisted Sister and I am sure that most people get stuck on that, I know that I do. We expect him to perform the old material and that is all well and good because who doesn’t enjoy a rocking rendition of “I Wanna Rock”, but with this new album, Dee is looking into the future.  In addition to his music, he has done movies, radio shows, and Broadway.  Dee is a kindhearted soul and an activist who donates his time to charities and speaks out against injustices.  In December 2016, Dee made a music video for the song “So What” documenting the Dakota Access Pipeline Protest at Standing Rock that captures the police brutality and human rights violations of the peaceful water protectors.  During the making of the video, the filmmakers were tear-gassed, targeted and shot at with rubber bullets in an overtly unconstitutional suppression of their 1st Amendment rights. Major props to Dee and his crew for sticking it out and getting it done.

:::KILLCODE’s::: set left the audience amped up and wanting more.  As his band kickstarted the title track off the new album, the energetic “We Are The Ones,” Dee ran out to the front of the stage to a very enthusiastic audience and proceeded to take off like a rocket ship.  He followed this up with over-the-top renditions of Twister Sisters’ “The Kids Are Back” and “You Can’t Stop Rock n Roll.”  All of his energy flowed out into the audience and you could feel an undercurrent building.

At this point, Dee addressed the fans explaining how earlier in the week his 85-year old mother had been hit by a car and recently awoke from a coma. He went on to tell his fans how music had helped him in the past during trying times and that playing these shows would him get through this difficult period. The audience cheered him on as he went into the creepy, stalker rock ballad, “Close to You” which is dedicated to his wife whom he apparently stalked before they started dating.

Dee’s performance is as strong as ever and at 62 he puts dudes half his age to shame. Dee served up all of the songs with his signature attitude, while his merry band of players delivered with cutting riffs, big grooves, and pounding rhythms.  Dee continued to engage the audience in between songs with anecdotes, at one point exclaiming, before the opening lines of the anthemic “Rule the World,” that “I am the voice for people who have no voice”.

As expected, it was the Twisted Sister songs that had the crowd roaring, “We’re Not Gonna Take It”  starts out as a heart-wrenching ballad and ends up as the rocking anthem it was meant to be.  Slowing things down a little, Dee shared his sadness over the loss of some great musicians over the past couple of years, artists like Lemmy of Motörhead, Chester Bennington of Linkin Park, and Chris Cornell of Soundgarden. This was followed by a tribute cover of “Outshined” in honor of Cornell.  On a more personal note, he shared his grief over the loss of his Twisted Sister bandmate, A.J. Pero, and dedicated “The Price” to him.  This was a very emotional moment for many in the crowd and practically the entire audience at The Chance was singing along.

After all of this emotional turmoil, we needed a little jump start and Dee delivered with a scorching rendition of “Burn in Hell”.  Now, if you’ve managed to read any of my other reviews you may have noticed that I just love drummers, so when Mike Dupke went into a drum solo during this song, well, it was just orgasmic.  Of course, Dee saved the best for last, pumping up the crowd by having everyone rehearse saying “Rock!” a few times before heading into “I Wanna Rock” and boy did they eat that up, singing and throwing their fists in the air during the chorus. Now you would think that it couldn’t get any better and that this would have been the last song of the evening, but… it was not… because as the band walked off the stage you could see that the crowd was not ready for the set to end and did not move until Snider came back out for the encore, a high-spirited, theatre shaking cover of AC/DC’s “Highway to Hell,” the perfect ending to a great show.

Both nights were spot on, energetic performances, displaying exceptional talent and showmanship. This was my first time at The Paramount and The Chance and I was very excited to be photographing and reviewing the shows as it gave me a chance to experience two different audiences. The Paramount is a gorgeous venue, and the crowd was vast and fun, but I felt that they were somewhat apathetic and I saw more cell-phones in the air than hands, which was kind of sad considering that Dee is a Long Island native.

On the other hand, the energy at the smaller, historical Chance Theatre was off the charts.  Poughkeepsie knows how to rock and the fans were ecstatic and absorbed with the show. The entire theatre from the front of the stage to the top of the balcony was packed with old school metal fans and there was a lot of head banging, flashing horns, raised fists, and singing along going on… there were even some air guitars being played in the back, I love metalheads…

FYI, I recently read that Dee has joined Hatebreed frontman, Jamey Jasta, on a new heavy metal album.  So keep your eyes peeled for a 2018 release and make sure to catch Dee Snider and his band next time they come to town. 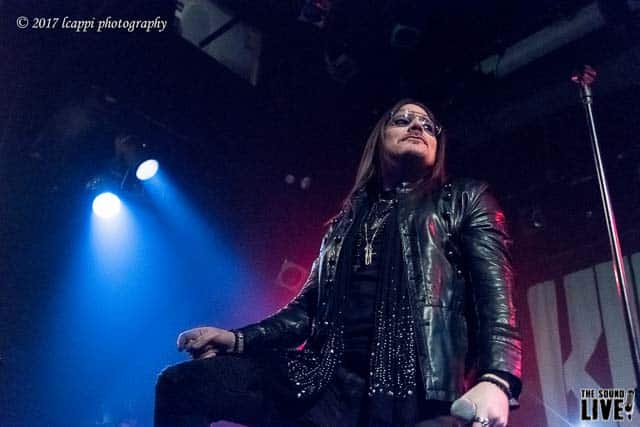 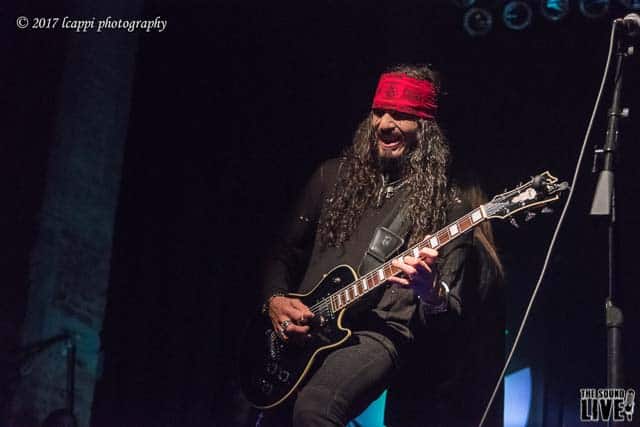 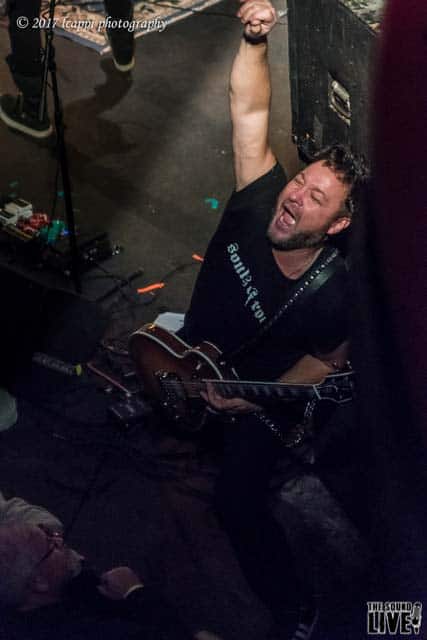 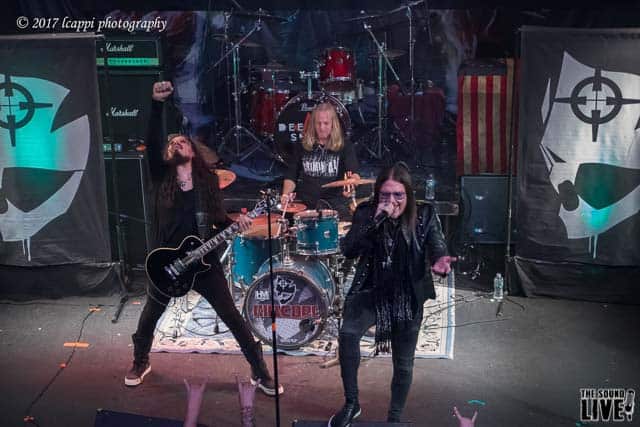 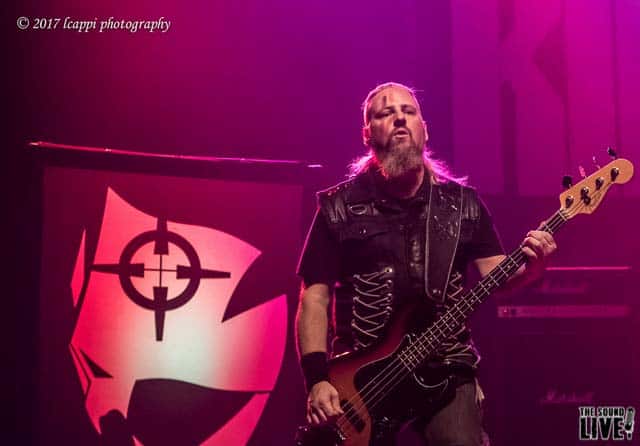 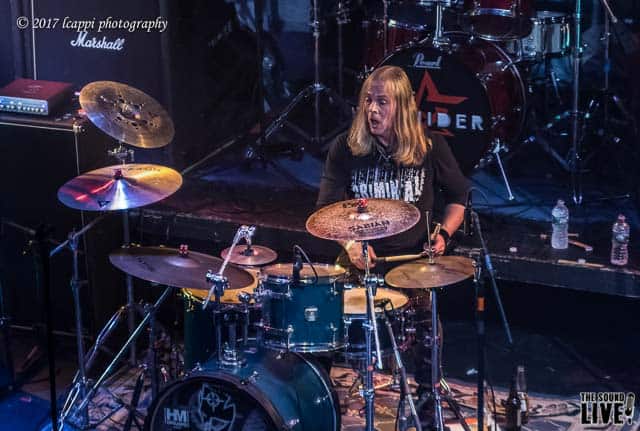 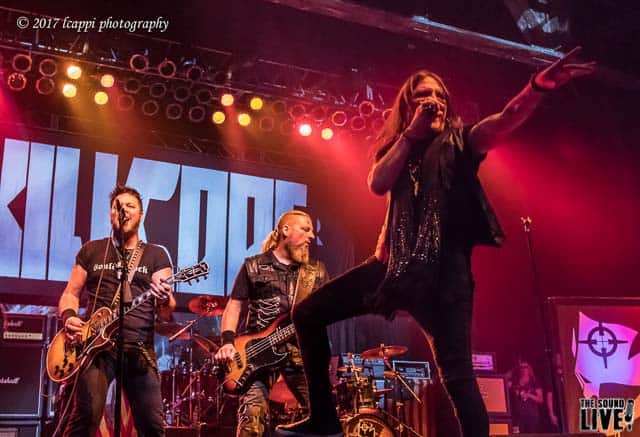 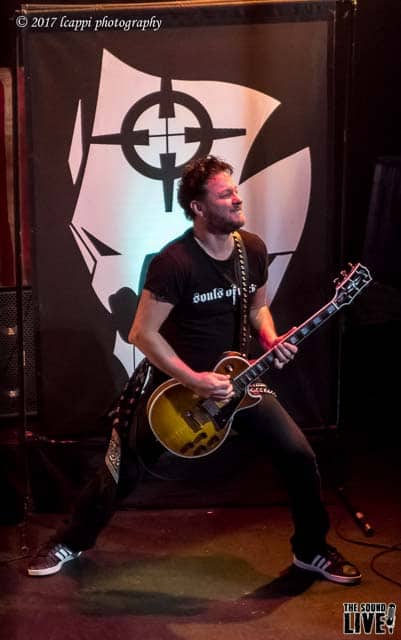 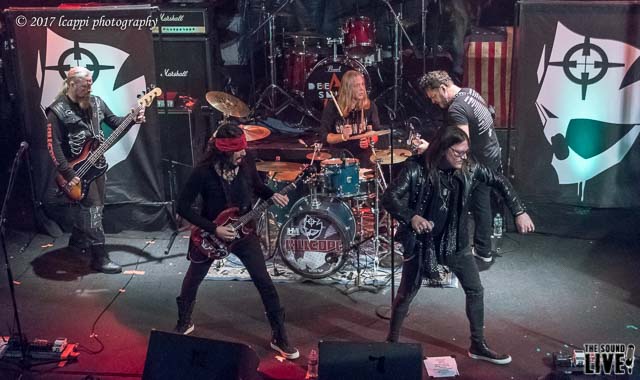 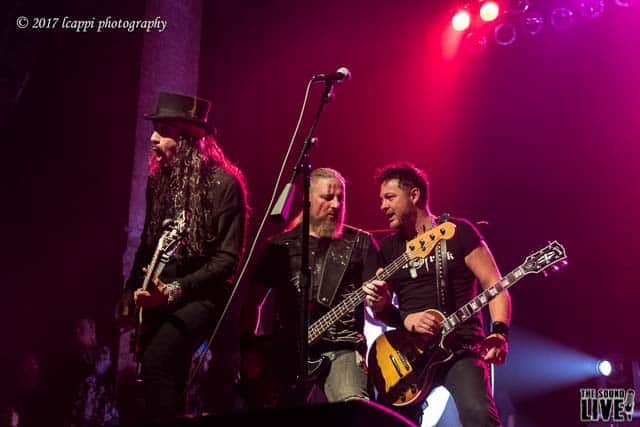 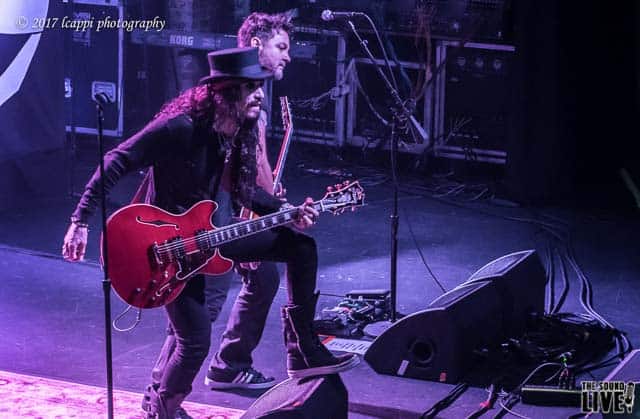 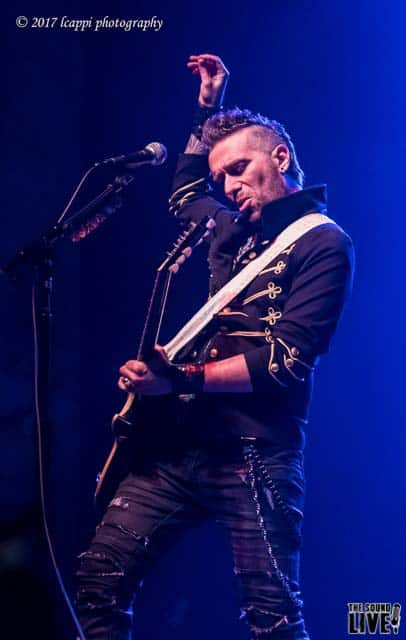 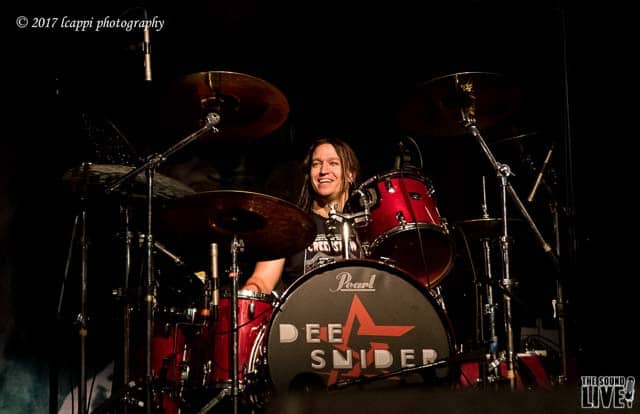 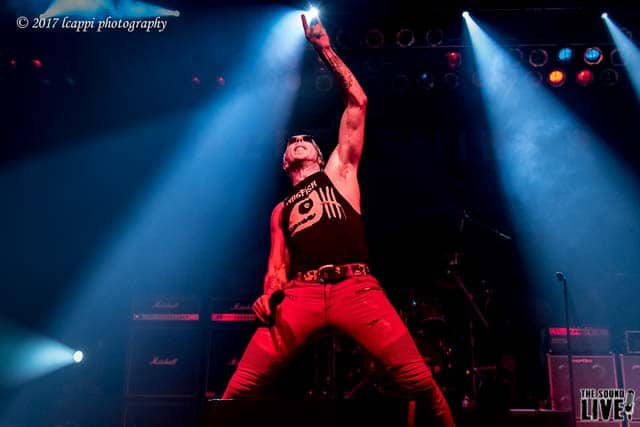 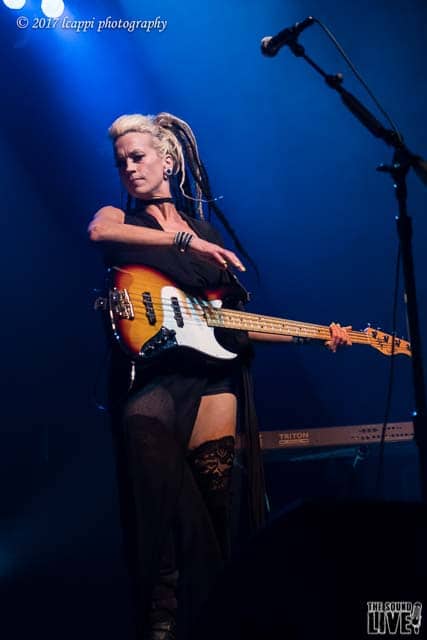 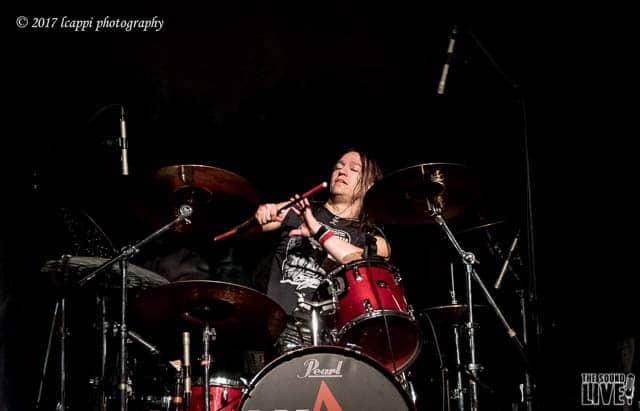 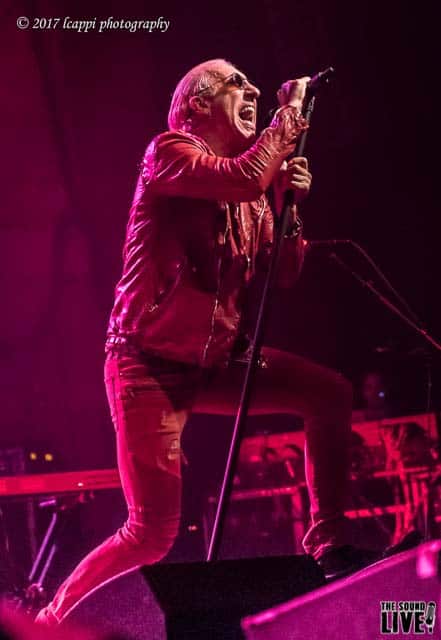 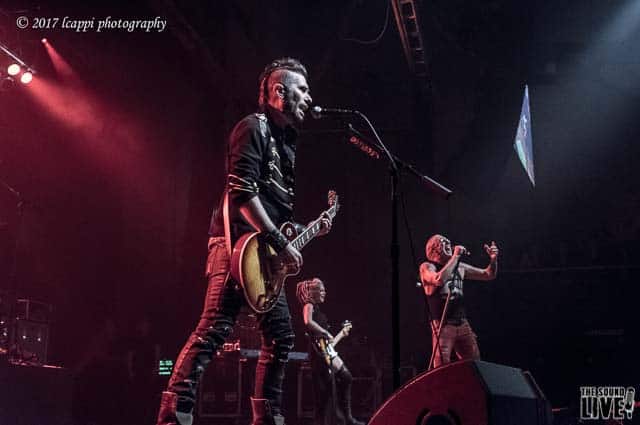 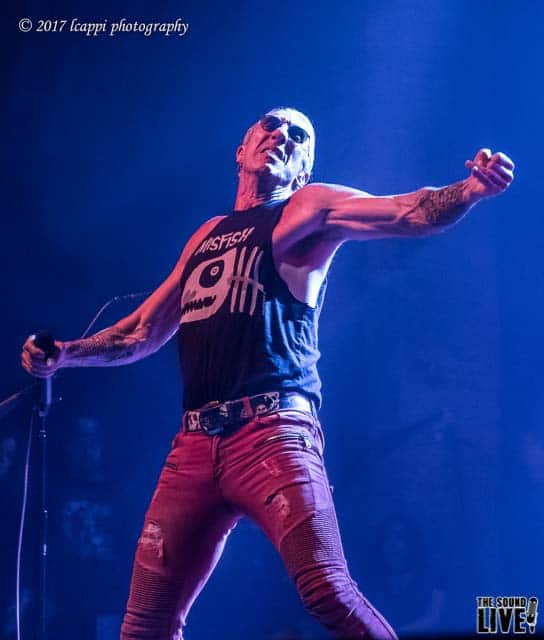 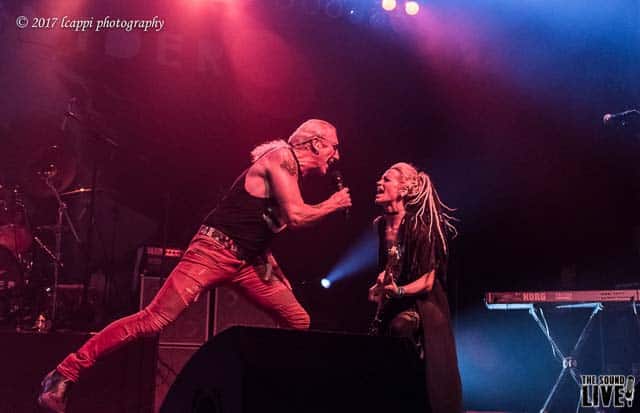 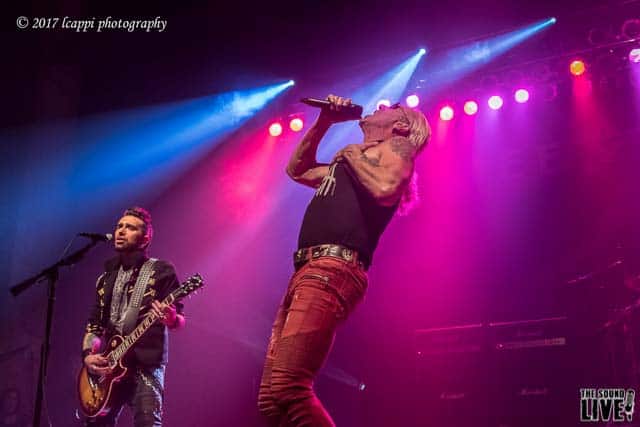 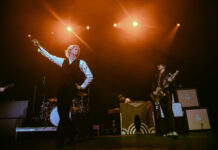