The Bowery Electric offered up a great night of old-school garage, punk, surf, and good ol’ rock ’n’ roll on March 24, 2016. The crowd was diverse and ageless and the bands included some of the “old guard” original LES/East Village denizens—a rockin’ good time was had by all.

Opening the show was Stupidity. On a self-proclaimed “American Quickie” tour, they flew their brand of hardcore/garage rock over to the States from Stockholm, Sweden. On March 17 they landed in Boston and from there they continued on to New York, Harrisburg, and Philadelphia. Stupidity, featuring Erniz on lead vox, PA on guitar/vocals, Miss Anna on bass, and Tommy Boy on drums, was formed in Stockholm in November of 2005 by former members of the bands Eager Beaver and The Cool Jerks. The name “Stupidity,” I am told, came from the title of a song by R&B great Solomon Burke, which happened to have been a favorite of all the band members. Their original music is inspired by early punk, soul, Brit rock from the ’60s, and new wave. 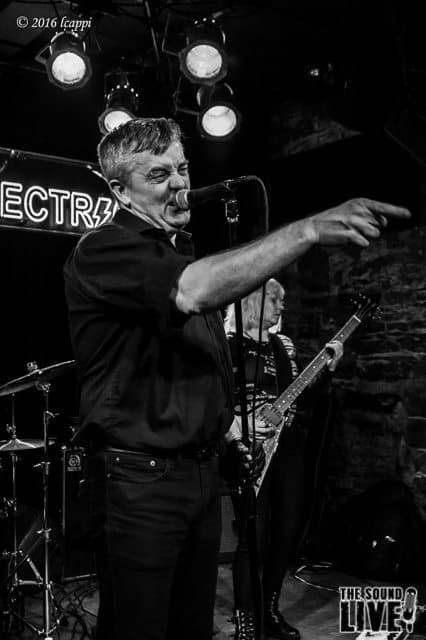 Since 2007 they have recorded and released four CDs, two singles and one two-song EP. This is their sixth time touring the USA. In 2008, after a two-week tour of the States, Stupidity was discovered by Little Steven Van Zandt. That same year, Little Steven’s Underground Garage Radio went on to name their song “Girl Named Moe” (2008) “The Coolest Song In The World.”  Stupidity has had four other songs awarded this title: “Move” (2011), “King Midas/Some Kinda Love” (2013), “Baby It’s You” (2014), and their latest single “Get Up” (2015). Their music has been featured on the soundtracks to Season 2 & 3 of the TV Series Lilyhammer starring Little Steven. The band itself was featured in a Season 3 episode of Lilyhammer performing “King Midas.” All of their music is available on Amazon, iTunes, and other music sites that can be accessed by visiting their website.

The band opened their set with the song “On Fire”, and let me tell you, they were. Erniz’s rough, gravelly voice is what punk was made for. Tommy Boy set a pace that was exhilarating, keeping the beat going from one song to the next, and by the time they hit the ninth song, “King Midas”, with lyrics like “I’m King Midas and everything I touch turns to shit,” the entire crowd was fist pumping with them to “hey, hey, hey, hey.” The next song up was “Rum and Gone” with guest guitarist/vocalist Keith Streng of The Fleshtones and The Split Squad joining them onstage, on the benches, and in the audience. The combination of Tommy Boy’s hard-driven beat, Erniz’s gritty vocals, and Keith’s guitar showmanship made this one of the most entertaining songs of Stupiditys’ set. 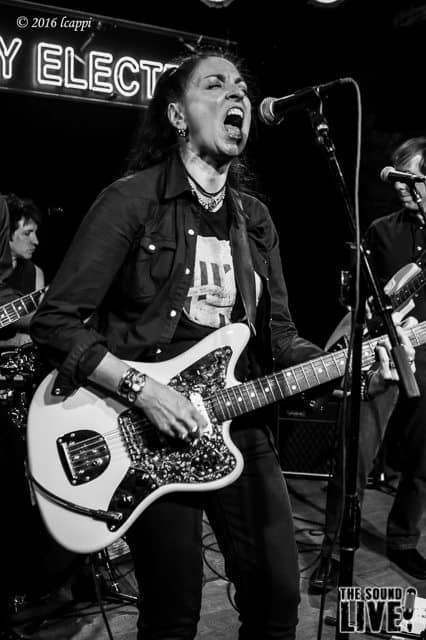 The second act up was Palmyra Delran and her East Coast Band, featuring Michael Lynch on bass and vocals, Richard Dev Greene on guitar and vocals, and the indomitable Mark Brotter on drums. Palmyra has been writing, performing, recording, and producing original music since the early ’90s. A rock and roll musician, singer, guitarist, and drummer, this multi-talented woman has played in the seminal rock bands The Friggs and Pink Slip Daddy, as well as having several of her own solo releases and recordings. This night Ms. Delran and her East Coast Band brought us her unique brand of trashy surf-rock and punky-pop.

Palmyra’s set included quite a few songs from her first full-length solo CD titled You Are What You Absorb (2013). The set was comprised of a few catchy surf-pop tunes, some garage rock, and a little old-school punk. She opened her set with “Love Has Gone Away” from the EP She Digs The Ride (2011). This surf-pop tune laid down the tone and raised the energy bar high for the entire set. Mark Brotter is a monster on the drum kit—his rolling tom beats and fast ride cymbals got my heart racing. Then in came Michael Lynch with his bass licks, joined by Palmyra and Richard’s guitar riffs and waves. Another great tune was “You’re My Brian Jones”, the first single off the 2013 album You Are What You Absorb. It was like a flashback to the psychedelic ’60s with its infectious groove and Palmyra’s smooth vocals. Little Steven’s Underground Garage voted this the  #1 song of the year in 2013.

Palmyra tours the East & West coasts as well as Scandinavia each year. While on the left coast she sings and plays guitar with Bubble Gun, a band that also features John Carlucci, bass; Laura Carlucci, keyboards and vocals; Michelle Balderrama, guitar and vocals; and Rikki Styxx, drums and vocals. When in Scandinavia, Palmyra tours with the afore-mentioned Stupidity. She can also be found on Sunday mornings at the Underground Garage on Sirius XM Radio 21 hosting her weekly show Palmyra’s Trash-Pop Shindig.  More information and links to her music are available  on her website. 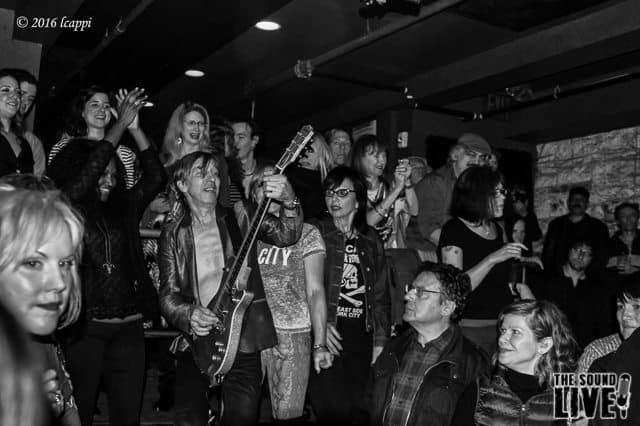 The headliners of the evening were the star-studded band known as the Split Squad. This is a FUN band, and their music ain’t so bad either.

Taken from their website: “Conceived over cocktails, wine, and beers in 2011, The Split Squad is one of those ‘perfect storm’ rock and roll bands that comes from a bunch of musicians who have done it all and have nothing to prove. While that may sound a bit boastful, the pedigree here covers about 140 years of collective rock and roll experience, from the most rarified of concert halls, down to the seediest of underground shit holes. These guys have both reveled and wallowed in it.”

The Split Squad features Rock and Roll Hall of Famer, founding member of Blondie, and one of the greatest living rock and roll drummers on the planet, Mr. Clem Burke; Guitarist Eddie Munoz, most famously known as the flash guitarist from LA’s legendary Plimsouls; The man they call the “mad scientist” behind The Split Squad, bassist/singer Michael Giblin, who was a member of the much-loved underground ’90s power pop trio Cherry Twister; guitarist and entertainer extraordinaire, Keith Streng, the well-known founding member of one of rock and roll’s greatest (and longest running) institutions, The Fleshtones; and keyboardist Josh Kantor, who in addition to playing for the supergroup The Baseball Project also happens to be the organist for The Boston Red Sox at Fenway Park. These powerhouse musicians were joined on stage this evening for a few songs by Brian Hurd of Daddy Long Legs playing the mouth harp.

Their set was comprised of songs from their debut album Now Hear This (2013), as well as some new songs that will be included on their next album. The entire set was an off-the-hook, just-have-to-dance mix of classic power-pop/garage/glam rock reminiscent of the 1970s and 1980s. “Feel the Same About You” is a classic 1970’s power-pop song with an insistent melody and a sing-along chorus. With Eddie Munoz and Keith Streng’s chiming, ascending guitars, and Clem Burke relentlessly thumping on the drum kit, the entire audience was jumping up and down and singing along with Mike Giblin. They slowed down a bit for “I Can’t Remember”, a 1960’s-type torch song that made you want to grab a partner and slow dance. Mike is one of the more animated bass players out there and his vocals lend authenticity to the songs. Clem played tirelessly, driving the beat from one song right into the next, and Keith was like the Energizer Bunny jumping off the bass drum and charging frequently into the audience while swinging his guitar around. The Split Squad’s set was an exhilarating live experience. You can buy their CD on their website https://www.thesplitsquad.com, and if you ever have the opportunity see them live, do it—you will not be disappointed. 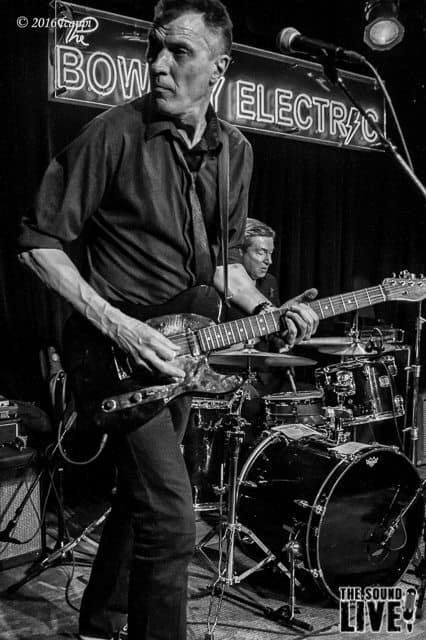 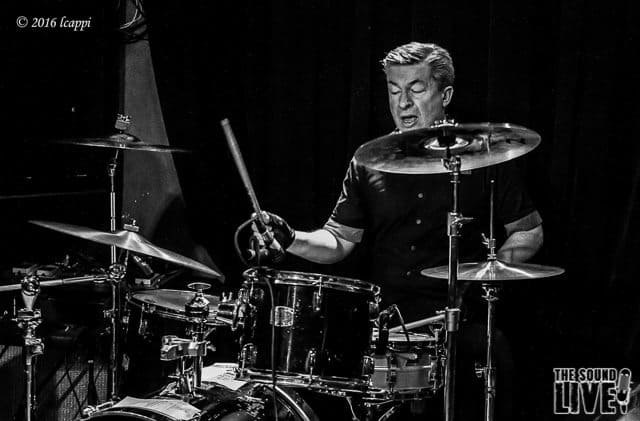 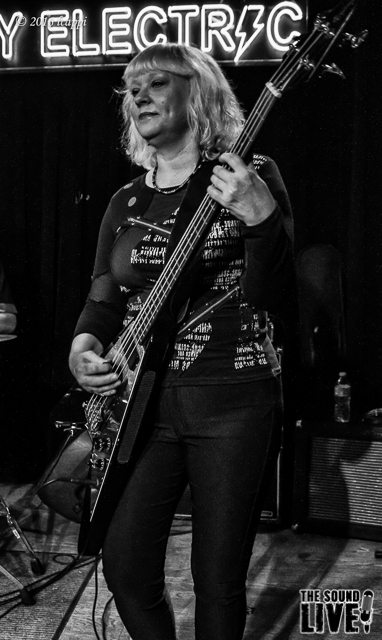 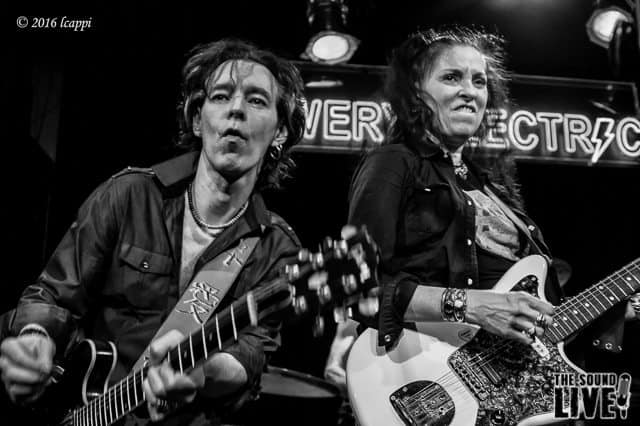 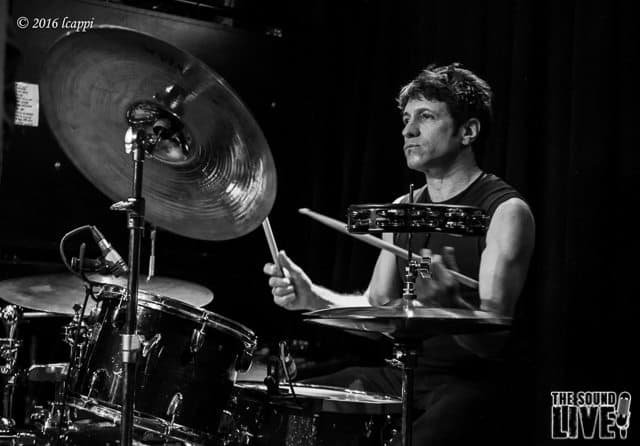 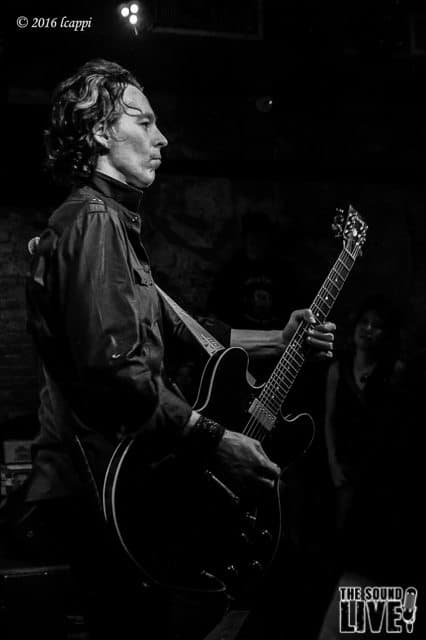 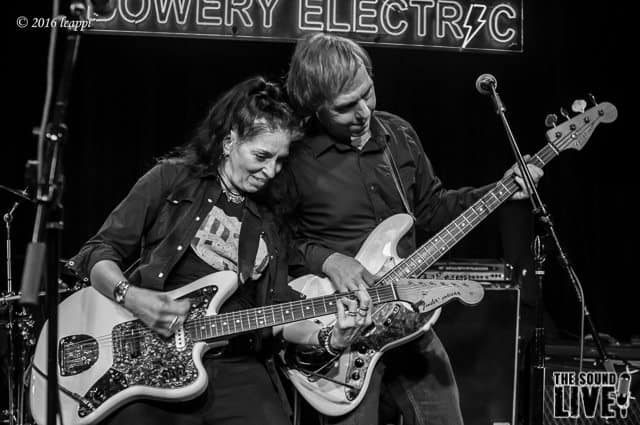 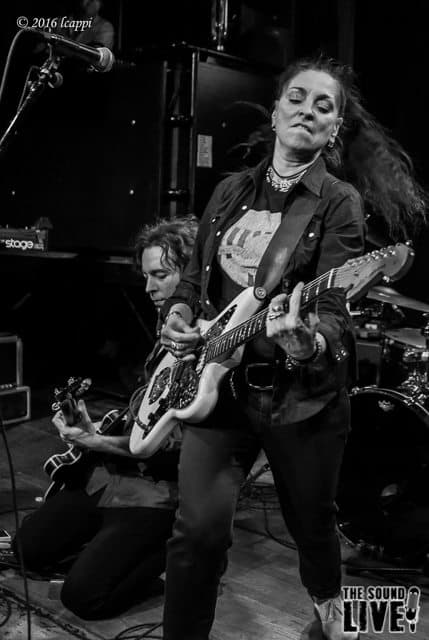 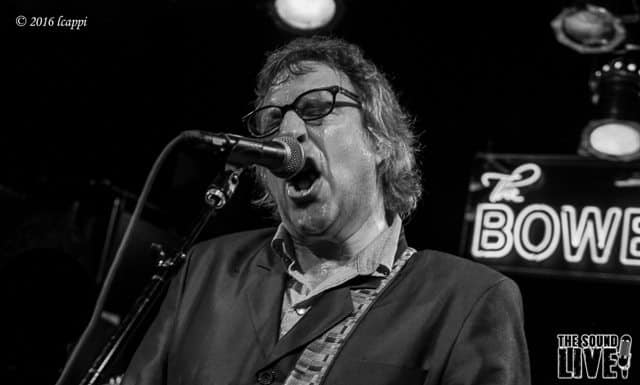 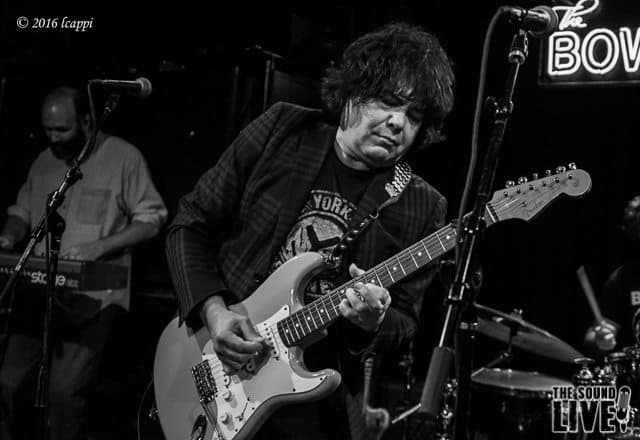 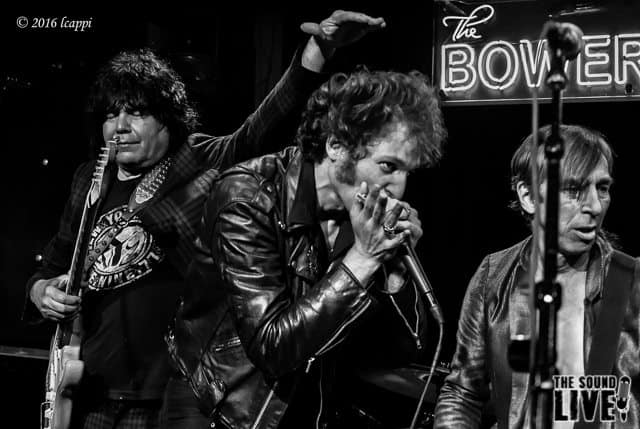 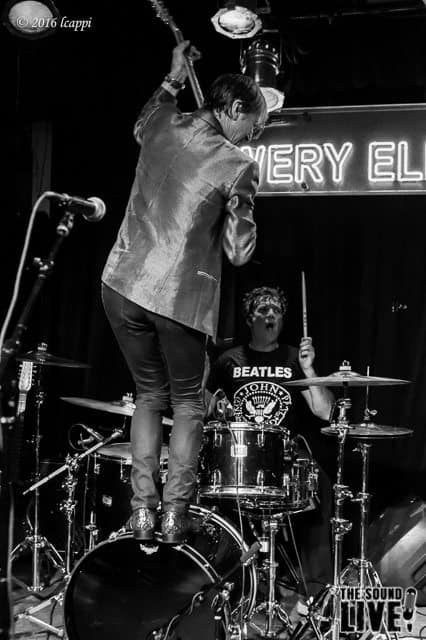 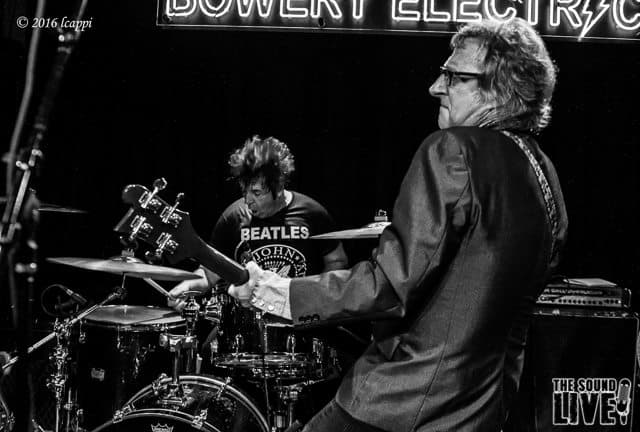 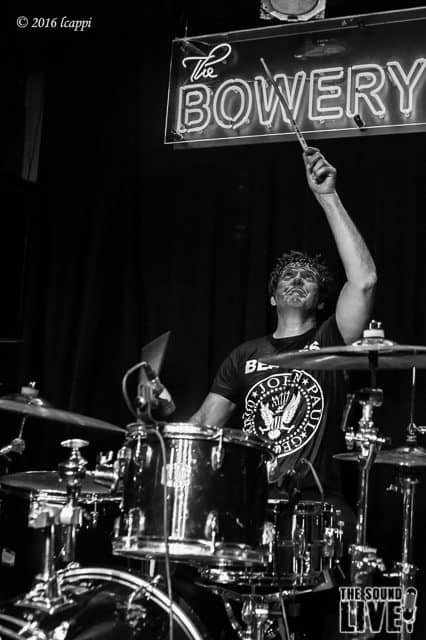